And while he may have not been born to run, his passion for science, kinematics and physiology helped propel him to become an Olympic track and field legend.

“Track and field is a sport in which everything is measured,” he explained. “The athletes who become very good Olympians at track and field pay attention to the numbers because they don’t lie.”

On Tuesday, March 6, Moses visited the University of West Georgia as the keynote speaker for the College of Education’s Fourth Annual Dag Folger Critical Topics in Education Speaker Series, sharing his story of transformation and motivating those in attendance to create their own triumphs.

Moses never planned to become an Olympian when he joined the track team in college. In fact, Morehouse College — where he was studying physics — didn’t have a track. But, four years after high school, in 1976, Moses became a household name as he outpaced the competition and won gold at the Montreal Olympics.

During this time, he didn’t have a coach or trainer. It was his responsibility to design and execute his own workouts by putting together his own intense training program.

This is where his education in physics began to take over. 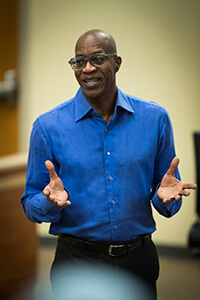 “My scientific background allowed me to analyze, strategize, execute and follow through — the four elements of doing a good laboratory in any science class,” he shared. “Each day, I found my zones, strategized, analyzed, initiated my plan, and then followed through. Every night I analyzed what I did that day and figured out what I was going to do the next day.”

It was during this process Moses realized, while most hurdlers took 14 steps between hurdles, he could shorten his to 13 and increase his speed. He began quantifying all of his efforts. He noted everything, classified his activities and kept detailed records of his workouts.

“I pushed the boundaries of what I was doing using physics, biology and chemistry to develop my performance,” he explained. “Track and field is a hard sport and it is not for everyone. As you work out, you keep getting more tired, so you increase your times. I set my workout up in the opposite way. My times were always decreasing. The difference between me and the other competitors was space.”

Moses not only walked away from the 1976 Olympics with a gold medal in the 400-meter hurdles, he accomplished it in record time. He won gold again at the 1984 Los Angeles Olympics. He broke his own record three times and remained undefeated for 122 consecutive races.

People have often asked Moses how he stayed motivated and maintained the streak that lasted nine years, nine months and nine days.

“I found a rhythm and broke boundaries to stay ahead,” he said. “The most important thing was being on target and pushing myself every single day.”

After retiring from track and field at 34, Moses maintained a relationship with the sports industry by serving as chairman of the United States Anti-Doping Agency. He also serves as chairman of the Laureus World Sport for Good Foundation, which recently gave him a lifetime achievement award. He even competed in a 1990 World Cup bobsled race at Winterberg, Germany, and helped America win the bronze medal.

While today’s hurdles are more metaphorical than yesterday’s for Moses, how he approached them in the ‘70s can apply to anything in life.

“It looks like the hurdle is moving towards you, because you’re the moving object and all the motion that you’re doing is irrelevant. You don’t feel it, all you know is that you’re running at full speed and you have to figure out when to jump,” he described. “You really never know where your life is going to take you. Sometimes you just have to jump in until you figure out what is going to happen. I always thought I was going to be a medical doctor or engineer, but my life has turned out completely different.”