How often do you chow down on pork burgers one moment, marvel at ancient fossils the next and maybe bid on a silent auction or attend a drone flight workshop while you’re there? This year’s annual geosciences pig roast at the University of West Georgia tied all these things together and more. 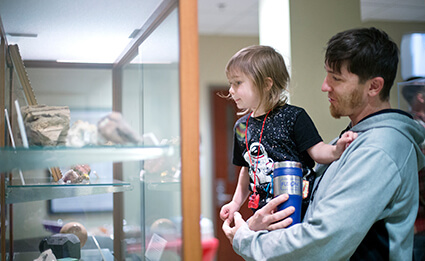 Celebrated for more than 40 years, the pig roast this year stood apart as it marked the 50th anniversary of geosciences at University of West Georgia.

Dozens of alumni attended with family and friends for food, a silent auction and to share success in – and love of – the geosciences.

Lacey Sabrina Adamson Spratt, a 2010 alumna of the geology program, attended the event with her husband, Nelson Spratt, also a geology alum. Lacey now works in environmental consulting, a career success she attributes to her UWG education and encouragement.

Brian Vann, a 2008 geosciences alumni attending the roast, reflected the diversity of innovative careers available to geosciences majors. Seeking a career change from publishing, Vann started night school in 2002 in pursuit of an undergraduate degree in psychology. Then he met Dr. Jeong “JC” Seong, professor of geospatial technologies.

“JC started showing me all these great things you can do with GIS,” Vann said, referring to geographic information systems. “Oh my gosh, I thought. I have got to do this.”

Vann now works with the Georgia Department of Transportation in traffic safety, where he uses geographic data in traffic accident analysis and prevention.

“Students started the roast as a way to bring the entire department together,” said Geosciences Department Chair Dr. James R. Mayer. “Up until 10 or 15 years ago, we’d go and get a whole pig, and the students would spend the night before roasting it over a pit.”

With 20 years of history with UWG, Mayer knows a lot more than just about the pig roast. He has deep knowledge of the history and direction of geosciences at UWG.

Geology and geography were once two separate departments, later combined to form geosciences. Mayer sees nurturing the geography program to expand its identity and unlimited potential as of great importance. 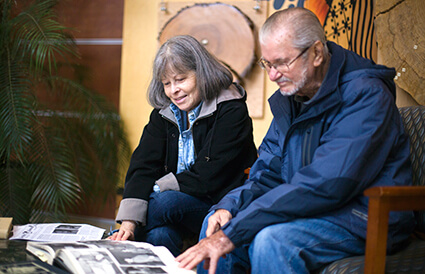 “Within geography, we have physical geography, which is very similar to geology in what people do. Then there is the mapping and cartography side including GIS, which gets very technical. But then also the human geography side, which is more akin to social science or political science. We have all of that here.”

In fact, the environmental sustainability concentration within geography has become the most popular concentration in the program, requiring expertise from across an eclectic mix of scientific, social and political fields.

In geology, the focus remains on classical, hands on, applied work in the field.

“Feet in the mud, getting out there” Mayer calls it, noting that this sort of experience translates very readily to geology-related employment. Much of that research by UWG students and faculty is locally and regionally-focused, emphasizing Georgia and adjacent areas.

“University of West Georgia is where that knowledge resides,” said Mayer. “Most of our students seek employment after they graduate, and virtually all of them find work in the field.”