After 30 years of trying, UWG lecturer Dr. Madhavi Sethna was invited to be a contestant on America’s beloved game show, Wheel of Fortune. Dr. Sethna said that being on the show was “on my bucket list before I knew of the term bucket list.” 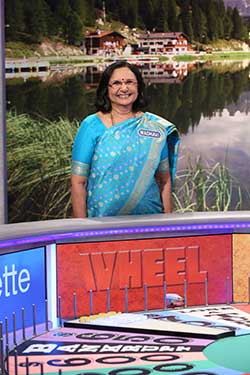 There are many ways to apply to be a contestant, and Dr. Sethna has tried them all. From sending in post cards to tracking down the “Wheel Mobile,” she was finally recognized after applying online earlier this year.

“I was ecstatic, surprised, speechless, and although I was coming home after a 30 hour long journey from India to the U.S., I went to the Omni Hotel in Atlanta straight from the airport to audition,” said Dr. Sethna.

The auditions involved over three hours of puzzle solving and introductions with nearly 60 other participants. During the day, some people were dismissed and others were invited to continue with the audition process.

The next portion included actually playing simulated rounds of Wheel of Fortune. Dr. Sethna and others were then told they would be put on a contestant list for 18-24 months. If chosen to be on the show, contestants were to make their own arrangements to get to the Culver City, California studio two weeks after being notified. Dr. Sethna auditioned in August, and in November she was invited to be a contestant.

“Many of my students were almost as excited as I was,” Dr. Sethna said. “Not only my students, but grandmothers of some also seemed excited about my being on the Wheel of Fortune!”

During this semester, Dr. Sethna has been exploring sociocultural perspectives of diversity in her classes.

“Some of my students strongly suggested that I should wear a sari even though some of my family and friends advised against it,” she said. “There was a sword hanging over my head – the executive producer may not choose me to be a contestant if I did not wear ‘normal’ western apparel.”

She said it reminded her of New York City in 1974 when little girls in the subway would tug at their mothers’ dresses and whisper that she was wearing a nightgown because they saw her wearing a long dress called a sari.

When the time came to be on the game, Dr. Sethna decided to stay true to herself.

“No one blinked an eye when I came on stage wearing a sari with a bindi on my forehead,” she shared. “It felt very validating and confirming to me. This is exactly the message I give to my pre-education students each semester. All students, especially students who are ‘different’ could be made to feel valuable by accepting them for who they are.”

Prior to the show, contestants were given hints on how to succeed at solving the puzzles. Dr. Sethna was assigned to the “number one” position, standing next to Pat Sajak.

“Pat was very personable, and he was good at making all of us feel comfortable,” she said.

As for the letter-revealing hostess Vanna White, Dr. Sethna exclaimed, “She was very ‘normal’ and nice to us as she walked past with her coffee and doughnut (yes, I did say doughnut).”