May 10 will mark yet another pivotal moment of celebration for the University of West Georgia.

Spring commencement ceremonies will be held Thursday, May 10, at 9 a.m. and 2 p.m. in the UWG Coliseum. UWG President Kyle Marrero will confer approximately 911 undergraduate degrees and 370 graduate degrees – adding to UWG’s record of degree attainment. 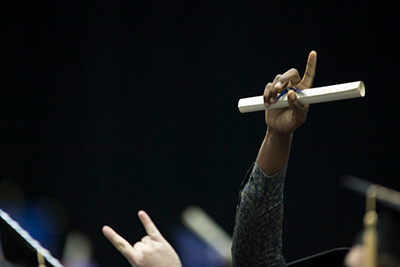 Two distinguished speakers will provide words of wisdom during the ceremonies. Laura Richards will address the graduates at 9 a.m., and Nellie Duke will speak at the 2 p.m. ceremony.

Laura Richards, an active philanthropist and dedicated community champion, is founder and chair of the Friends of Carrollton GreenBelt LLC. The GreenBelt is an 18-mile recreational and nature trail within the city of Carrollton. Prior to her return to her roots in Carrollton, Richards worked for McMahon Publishing in New York City and for Vermont Bicycle Touring as a European guide.

Richards has received numerous awards for the GreenBelt as a forerunner and innovator in sustainability, community connection and service. Additional honors include a 2016 Karl T. Steinen Award for Service to Anthropology from UWG’s Department of Anthropology; a 2016 Silver Award for Beautification from the Carroll County Chamber of Commerce; the 2017 Community Recognition Above and Beyond Award from Carrollton Civic Woman’s Club; the 2017 Award for Environmental Excellence from Keep Carroll Beautiful; and the 2017 Georgia Recreation and Parks Association Volunteer of the Year award.

Richards has served on numerous boards, including the Georgia and Alabama Land Trust, the Tanner Medical Foundation, the Trust for Public Land and the Carroll County Board of Health.

Her dedication and service to the Alice Huffard Richards Charitable Fund since 2008 continues to transform the organization, named in memory of her mother.

Nellie Duke, who was born on the 20th anniversary of International Women’s Day, was a charter member and chairwoman of the Georgia Commission on Women, serving from 1994-2015. She was first appointed by Lt. Gov. Pierre Howard and was recently re-appointed by Lt. Gov. Casey Cagle.

Former President Bill Clinton appointed her to the Commission on Women in American History. As part of her impactful leadership and work with the Georgia Commission on Women, she published the book, “Women and the Law, A Guide to Women’s Rights in Georgia.”

The International Alliance of Women awarded her the TIAW World of Difference Award. As such, she was one of only 16 American women to receive this honor. The Georgia Legislature revered her in its 25 Women for the 21st Century Award and named her an honorary state senator in 2008.