The family of Ingo Swann and his former colleagues, along with University of West Georgia Department of Psychology Chair Dr. Don Rice and other faculty, gathered in Ingram Library recently to celebrate the donation of the papers and book collection of Ingo Swann (1933-2013), a writer, artist, and psychic who notably was involved in the Stargate Project, a United States program which investigated whether psychic phenomenon had domestic and military applications during the Cold War. 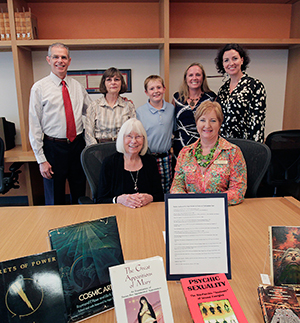 Swann’s papers have been donated the University of West Georgia’s library by his sister and heir, Murleen Ryder, and will be placed in Special Collections. The papers of Swann join other papers of parapsychologists, including those of Dr. William G. Roll, a former UWG psychology faculty member, with whom he corresponded.

Beginning in 1972, Swann worked with Dr. H. E. Puthoff and Russell Targ at the Stanford Research Institute (SRI) in experiments began with magnometer psychokinesis. Swann was later involved in experiments, using a term he coined “remote viewing,” where the subject visualizes locations based on geographical coordinates. It was during this type of experiment in 1973 that Swann stated that the planet Jupiter had rings which was prior to the Voyager probe's visit there in 1979. Swann’s active career in remote viewing spanned 1972-1979, but his work for the U. S. Government as a consultant extended through the mid-1980s.

Swann was born on September 14, 1933 in Telluride, Colorado. In 1955 he earned double bachelor’s degrees in biology and art from Westminster College, Salt Lake City, Utah. In 1955, Swann enlisted in the Army and served a tour of duty in Korea and the Far East. Upon returning to the United States, Swann settled in New York City to work as an artist. Not able to financially thrive, Swann accepted a position at the Secretariat of the United Nations and worked there until 1968. Beginning around 1968, Swann began writing books and painting. Swann’s paintings were of the cosmic art genre. In July 1971, Swann participated in an experimental photography session in which Bert and Sherri McCann sought to capture people’s psychic energies in a blackened room. Allegedly, the photograph of Swann included a ball of light above his head. It was largely from his social interactions, particularly with a woman by the name of Zelda Suplee and with Dr. Gertrude Schmeidler, that Swann became fully aware of his psi abilities, and eventually came to the attention of Dr. Puthoff at the Stanford Research Institute. Swann died January 31, 2013.

For more information about the Ingo Swann donation, contact Blynne Olivieri, head of Special Collections at bolivier@westga.edu or 678-839-5455.