When Eric Graise ’15 performed as a Blanche and Irving Laurie Musical Theatre Fellowship winner at the national 2015 Kennedy Center American College Theatre Festival in Washington, D.C., he made quite an impression. Based on that performance, he was nominated and invited to the White House to participate on a panel discussion celebrating Americans with disabilities and the arts. 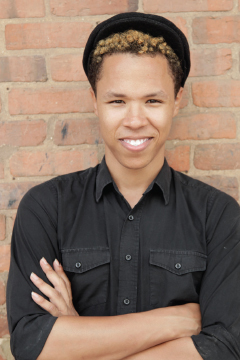 “Being asked to participate on the panel was a total shock,” Eric said. “I honestly didn’t believe it until I Googled the email address and found it on the White House website.”

“I can’t express in words how I felt about the opportunity to participate in the panel discussion,” Eric continued. “What excited me most was being able to tell my story. I don’t believe the word ‘disability’ is even valid in the arts. How can one be disabled when art isn’t concrete, but created? Each work of art stands on its own and is not subject to societal standards of what is considered normal. And being surrounded in a room by those who exude this in every way was amazing.”

Never wanting to be anything but a performer his entire life, Eric planned to go to school for opera and started training and studying classical music in the sixth grade. Although he continued his classical studies in high school, he also fell in love with theatre at this time. After graduation, he received a full scholarship to Shorter University studying opera.

“Something didn’t feel right,” he confessed. “Convinced I wasn’t able to do theatre due to being a double leg amputee, I gave up the arts, transferred to UWG and began studying marketing. But I was unable to keep my hands out of the theatrical pie.”

Eric admitted he was surprised when he got a role as Sheriff Reynolds in the UWG production of “Bat Boy: The Musical.” From there, the roles just kept coming: Tom Collins in “Rent;” Papa Ge in “Once on this Island;” Sally Bowles in “Cabaret.”

“It took a long time,” he recalled, “but the faculty convinced me that I belong in the theatre.”

His experience working with the UWG Theatre Company went beyond acting. In addition to lighting and scenic design, he took a turn as the music director in the “25th Annual Putnam County Spelling Bee” and directed the “24th Annual Episodes in Sexuality” as his senior capstone project.

Eric also became something of a pop culture icon on October 30, 2011, when he was cast as Stump-Leg Walker in AMC’s zombie hit, “The Walking Dead.” In the Season 2 episode, “Save the Last One,” characters Shane and Otis go to the local high school to retrieve medical supplies. After being cornered by a horde of zombies in the gym, the two jump from the bleachers into the swarm. Otis is grabbed by a walker crawling along on its belly because its legs ended at the knees. In those few seconds, Eric became a legend to “TWD” fans. Merchandise with his zombiefied likeness, such as posters and Halloween stencils, were manufactured. He even started to get requests for autographs.

“I was praised by so many friends, family, and even strangers,” he stated. “I had a great time on set, having the make-up and prosthetics applied and getting to work with some of the stars of the show. It’s also pretty cool to see how it all turns out. It’s amazing how drastically different it looks on the screen as opposed to when you are there.”

After graduating in April 2015, Eric was selected as an acting/directing apprentice for an Atlanta theatre company, Actor’s Express. So far, he has been an understudy, was appointed as assistant director for “The Thrush and the Woodpecker” written by Steve Yockey, and is currently an ensemble member in the company’s production of “Sweeney Todd,” which debuted in January.

All of this paved the way for Eric to celebrate the 25th anniversary of the Americans with Disabilities Act in Washington, D.C. He also gave credit to his alma mater.

“If you trace a line through my life, you will find that I would have never been asked to speak at the White House if it wasn’t for the faculty at UWG,” Eric said. “They provide you with so many opportunities to hone your skills as an actor, designer, or whatever field you’d like to do in theatre. One of the most important aspects about the school is its connection to the professional world. With multiple faculty members who currently or previously worked in the industry, it allows you to network and build a bridge for yourself before you even graduate.”

Eric said he is inspired by those who are suffering, be it physically, mentally, or emotionally, and he wants to help them find happiness through the arts.

“I spent a good bit of my childhood internally hating myself for being different,” he concluded. “It was art that gave me a sense of worth and purpose. I knew it was a place that I could be both myself and someone else for a while; a place that I could not only learn valuable life lessons, but in turn share that experience with an audience. Nothing beats having to work with others closely in a way that you depend on each other to create this work of art. I want to help others find that joy as well.”