Professor of History & Director of the Center for Public History
Department of Art, History, and Philosophy College of Arts, Culture, and Scientific Inquiry 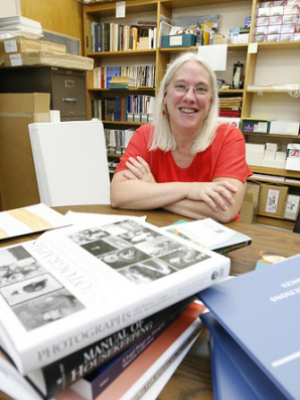 Dr. McCleary's current research focuses on National Park Service history, textile history in Georgia, and cultural heritage tourism. She co-curated a Smithsonian Museum on Main Street Exhibition on rural America, Crossroads: Change in Rural America, which opened in 2018, and she serves as the state scholar for the 2019-20 exhibition tour in Georgia. She is also currently researching and writing about heritage tourism and craft in Malawi.

Dr. McCleary is preparing to teach a Study Away class on cultural heritage interpretation and preservation trip New Mexico in Spring 2020 and a course on Heritage and Tourism for a summer 2021 study abroad trip to South Africa, both offered through the Department of History.

Dr. McCleary coordinates the Public History program and the Museum Studies Certificate program. She co-teaches the courses in Museum Studies with staff at the Atlanta History Center, having worked for many years in the museum community in Virginia and as a museum consultant.

In her role as Director of the Center for Public History, Dr. McCleary directs a variety of research projects focusing on the history and culture of the region and the state, including the West Georgia Textile Heritage Trail and the Regional Music Project. She co-chairs a university committee documenting and interpreting a cemetery for enslaved peoples on the former Thomas Bonner plantation, formerly located on the UWG campus.

Before coming to establish the public history program at the University of West Georgia in 1997, Dr. McCleary worked as an architectural historian with the Virginia state historic preservation office; as assistant director, chief curator, and curator of research and programs at the Museum of American Frontier Culture in Staunton, Virginia; and as a public history consultant.

“The Turnpike Towns,” in The Great Valley Road of Virginia, edited by Warren R. Hofstra and Karl Raitz, University of Virginia Press, 2010.

“Powder Springs Has Some Deep Roots In It”: An Oral History Portrait of an African American Community, with Catherine Hendricks and Stephanie Wright, published by the Center for Public History, University of West Georgia, May 2007.

"Forging a Regional Identity: The Development of Rural Vernacular Architecture in the Central Shenandoah Valley, 1790-1850," in Kenneth Kooks and Warren Hofstra, editors, After the Backcountry, University of Tennessee Press, 2000.

"Ethnic Influences on the Early Architecture of the Shenandoah Valley," in Michael Puglisi, Diversity and Accommodation: Essays on the Cultural Composition of the Virginia Frontier, University of Tennessee Press, 1997.

"Preach a Little, Paint a Little, and Drink a Little: The Work of Green Berry Jones," Augusta County Historical Bulletin, 1986.

"Vernacular Architecture and the Archaeologist," Proceedings from the Conference on Uplands Archaeology, James Madison University, 1983.

"Domesticity and the Farm Woman," Perspectives in Vernacular Architecture I, University of Missouri Press, 1982.

"Along the Ridge:" Reflections on a Nineteenth Century Cemetery on the University of West Georgia Campus

Trail of Tears Interpretation and Protection, 2012-4