Learning through hands-on exploration has been a theme of the University of West Georgia astronomy program for decades. 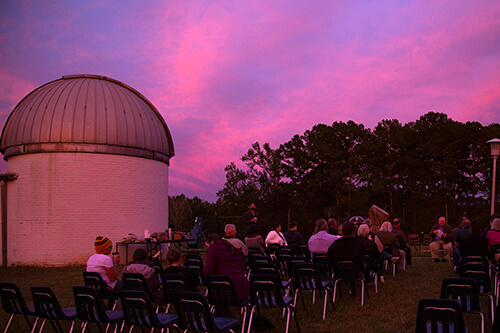 This year marks the 40th anniversary of the UWG Observatory and 50 years since the first astronomy course was taught.

The observatory building was completed in the fall of 1979 and has been a resource for research and exploration ever since.

The celebration brought together former and current students, professors and community members who have been involved with the observatory over the years. Director Ben Jenkins spoke on the availability of the observatory as a resource for the community.

“We’re proud of the fact that the observatory is here not only for the use of our students but also for the local community,” Jenkins said.

In addition to celebrating the anniversary of the first observations, the event served as a commemoration to Dr. Bob Powell, UWG physics and astronomy professor emeritus, and his years of dedication and service.

Powell spoke on his admiration and personal experience with the observatory and astronomy program.

“It has been wonderful to have access to this facility and to enhance my own learning and appreciation of the universe,” Powell said. “It’s been a joy to teach college students and others about astronomy.”

Being the first to teach astronomy at UWG in 1969 – and designing the observatory himself – Powell has been there through it all. As part of the celebration, he was able to share a complete history of the observatory and the astronomy program as a whole.

“Astronomy has become a very big program here,” Powell said. “We started with 25 students and by 2012 we had grown to 650 students taking astronomy courses.”

Several of Powell’s former students spoke at the event to express their gratitude and appreciation for Powell and his dedication to the program. Alumnus Don Ethridge shared how much Powell has meant to him and others.

“We are so fortunate to have had our lives influenced by him,” Ethridge said. “The ripple effect that he’s had on his students is amazing.”

To show his continued support and admiration for UWG and the physics department, Powell and his family created the Dr. Bob Powell and Family Endowed Scholarship. This scholarship is intended to financially support first year physics students.

Dr. Shea Rose, assistant dean of the College of Science and Mathematics, shared her excitement and hope for the future of the observatory and the astronomy program.

“We are looking forward into the future and are expecting wonderful things to come from this observatory and all the tradition around it,” Rose said.

The observatory has monthly outreach observations that are open to the public as well as other school and civic events.

To stay connected with the observatory community and to receive information on upcoming events, follow the UWG Observatory on Facebook.