The prevalence of autism spectrum disorders (ASD) cases in the United States is on the rise, and although it can be detected as early as age 2, most children are not diagnosed until age 4. 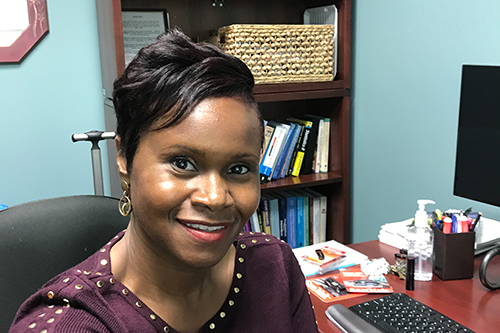 The University of West Georgia’s Dr. Twyla Perryman is working to change that.

“While working on my doctoral dissertation, which focused on the age of diagnosis of autism spectrum disorders, I noticed it wasn’t just about people recognizing the signs and symptoms,” explained Perryman, assistant professor of communication sciences and disorders in UWG’s College of Education. “It was also about how parents or caregivers, or even pediatricians and clinicians, interpret them.”

She surveyed caregivers of children from various ethnic backgrounds who were recently diagnosed with ASD for her study. Within the different groups, Perryman learned that children who received another diagnosis prior to being diagnosed with autism were diagnosed later than children who weren’t given another initial diagnosis.

Additionally, African-American children in the study who were diagnosed at a later age were more likely to exhibit greater levels of social anxiety, inhibition, or difficulty with empathy and social engagement.

“There were differences among parents and what they initially thought the symptoms were,” she said. “They would attribute the signs to their children being willful or needing more discipline, which led to the late diagnoses.”

The findings supported Perryman’s theory that more work needs to be done in understanding how people interpret the symptoms when they first see them, and whether or not it can have an impact on when they approach a doctor on concerns.

“This is especially true for kids who may be higher functioning, because those kids will often show types of skills – maybe they really like numbers or letters – that can be interpreted as though they’re just super-smart kids,” she said. “They are smart kids, but it doesn’t negate the fact that there are still some social interaction issues going on.”

In a 2018 study, the Centers for Disease Control (CDC) estimated that one in 59 children are diagnosed with the disorder, up 15 percent from 2016. Experts believe this has more to do with better monitoring and diagnosis of the developmental disability.

Perryman, who teaches multiple courses on language disorders in children, said that because of the prevalence of ASD, it is important to educate her students on the signs and symptoms as well.

“It’s very likely that they’re going to work with ASD individuals if they are involved with the pediatric population, and even if they work with the adult population,” she said. “They need to be able to educate parents and pediatricians on the signs and symptoms of autism in an empathetic and sensitive way.”

Almost as important as early diagnosis and intervention is what happens to children with ASD after high school. Perryman said this transitional period is a crucial part of these individuals becoming integrated into society via employment or post-secondary education.

“Parents talk about a service cliff, because children kind of fall off the cliff when they age out of the school system,” she explained. “The school districts are no longer responsible for them, and the parents may not be prepared. Because we’re identifying these kids earlier and providing them with foundational skills, many of the high-functioning students can handle the academics of college. It’s the social aspect of college and the workforce that is tripping them up.”

One such program, Project WOLVES, is housed at UWG. Project WOLVES provides individuals 18 years or older who have intellectual disabilities with opportunities to continue their education, socialize with peers who are the same age, gain additional employment skills and overall grow more independent. It is a new program that is about to enter its second year.

Perryman used Dr. Temple Grandin as an example of different perspectives those with autism can offer to our society. Grandin, one of the first individuals with ASD to publicly share insights from her personal experience of autism, is a professor of animal science at Colorado State University who revolutionized the farming industry.

“I want to make sure they aren’t limited by the disorder or diagnosis, and they’re able to share that uniqueness they bring to the world,” Perryman concluded. “I think we’ve only touched the tip of the iceberg with what these individuals can show us.”