Today, Abdulaah Savage is a North Paulding High School junior just beginning to learn about securing computers to prevent interference from outside sources. 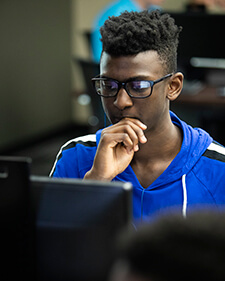 By the time Savage graduates college, the Bureau of Labor Statistics estimates the information security job market will have increased by 28 percent, much faster than the average for other careers.

And Savage is ready to be on the front lines.

“I am very interested in this field,” he proclaimed. “I would really like to go into cybersecurity, probably for private businesses.”

Savage was one of more than a dozen high school students who recently came to the University of West Georgia to dedicate one last week of summer break to learning about cybersecurity, its principles and how it applies to everyday life.

Developed by the Air Force Association’s (AFA) CyberPatriot program and sponsored by the College of Education's (COE) Fusion Center and Department of Educational Technology and Foundations, CyberCamp 2019 was targeted toward beginners in cybersecurity.

COE instructor Dr. Jonathan Gratch has been introducing west Georgia’s young minds to the concept of internet safety since 2016.

“There is so much technology out there now on so many different devices that connect us to the internet – mobile phones, laptops, watches,” Gratch observed. “Students, both at high school and college levels, don’t necessarily know how to maintain their own security and privacy online.”

Gratch explained that the camp began with an overview of cybersecurity principles and what makes a secure computer or network.

“Since students attending the camp might have zero knowledge of computing or cybersecurity principles, we look at contemporary issues that are in the news, such as Facebook and Google’s privacy issues,” he said. “Everyone gets the same experience.”

From there, the group looked at different types of threats and examined how to balance public and private data online. Next came hands-on activities of securing machines, from setting up who has access to certain files to masking potential flaws, all on different types of operating systems.

Gratch said the local camp has doubled in size since its inception in 2016, and national camps have grown to nearly 7,000 since 2013.

“There’s hope the students who attend these camps will go back out to their schools and create their own CyberPatriot teams who can compete in the worldwide and national competitions,” he said.

AFA is now offering advanced camps for students who want to expand their cyber safety knowledge, much to Savage’s delight.

“I would definitely attend a more advanced camp because I am interested in this field,” he concluded.