When Katie Brewer was younger, an influential person in her life helped her find her voice – literally. Now, she wants to pass that gift on to future generations. 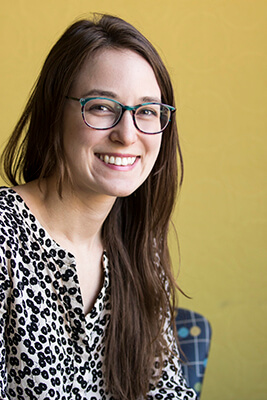 Brewer was a military child born in California and moved around often before she settled in Kennesaw, Georgia, at 8 years old. After attending a couple of other institutions during her collegiate career, she’s now finishing strong in the College of Education (COE) at UWG.

The COE’s undergraduate program in speech-language pathology is rare in the state of Georgia, and the proximity to Brewer’s home is a bonus.

“I love the program,” she said. “It’s very hands-on. The faculty is incredible, they’re with you every step of the way. They’re honest about what speech therapy is going to be like and helpful in making sure you get there. They’ve been wonderful.”

The program has allowed her to experience an array of new opportunities. She has the chance to join career-related clubs and associations, attend conferences, and become involved in research with her professors. Brewer has built connections within her department, something she never had before.

“Here, I know the professors and they all know me,” Brewer remarked. “The relationships have been encouraging. That’s one of the reasons why I transferred universities a couple of times. No one was really invested in me.”

Brewer has been able to explore different schools and majors, but they have all lead back to speech-language pathology.

Brewer’s goal to become a speech-language pathologist stemmed from her own childhood and her struggles with stuttering. Brewer began to stutter at the early age of 2 years old, as soon as she was able to talk. Her stutter became severe, keeping her from talking days at a time.

Brewer describes it as a painful and emotionally taxing speech disorder. It affected the way others perceived her in daily life.

Brewer was home-schooled, and although she wasn’t a victim of bullying, she knew others who were because of their stuttering. She continued to grapple with her stuttering throughout her childhood.

“My parents obviously noticed, and they took me to speech therapists who invariably said the same thing: ‘She’ll grow out of it,’” said Brewer. “Stuttering is seen as a disorder that’s really hard to deal with in the speech therapy world.”

When Brewer was 8 years old, doctors were concerned her condition could become permanent, as is the case with various types of stuttering that persists beyond the age of 5. Brewer and her family’s concerns were confirmed when a speech therapist told them she wasn’t growing out of her stuttering. By this point, a lot of damage had been done.

“I was dealing with anxiety and no social life because I didn’t ever want to talk,” Brewer said. 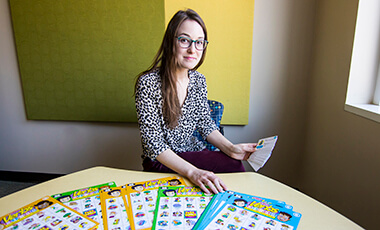 Brewer’s parents found the only stuttering specialist in Georgia and they visited him immediately. Her new speech therapist stuttered himself as a youth, which was incredible for her, as she had never met anyone who had recovered from stuttering. Her speech therapist had cured himself, created his own program and inspired Brewer beyond her speech disorder.

“He changed my life,” Brewer shared. “He gave me a voice. He taught me that it doesn’t matter how fluently you speak. What matters is what you have to say.”

Brewer’s confidence grew along with her speech fluency. As she finishes her studies, Brewer is also shadowing her speech therapist and learning one-on-one how his practice runs. She wishes to extend her knowledge to others.

“That’s the gift I want to give to the world,” she said. “I want to help people find their voices the same he helped me find mine.”

Struggling with speech comes with numerous secondary symptoms, including anxiety, avoidance and fear – all of which can make trying to speak even more unnerving.

Brewer’s time at UWG has helped her grow in confidence and pushed her to pursue her goals. The professors see her speech disorder as a way to connect with clients, rather than a barrier.

“I’ve truly become more confident in myself,” Brewer shared. “I’ve had faculty members believe in me in a way that several years ago, I wouldn’t have believed in it myself. They’ve encouraged me to be an advocate and speak up.”

The faculty in the COE have helped it “click” for Brewer. Through their passion and understanding, she has come to see this is what she was born to do. The speech-language pathology program continues to encourage her to follow her dreams to one-day accomplish what she’s set out for.

“The people I’ve encountered at UWG actually care enough to see you achieve your dreams,” Brewer concluded. “I’ve become way more confident and want to inspire younger generations like I was inspired. I’m ready to get out there.”