Former University of West Georgia coach and professor Dorothy McNabb left such an impression on the college and the community that when she retired from her 35-year career at UWG in 1988, the City of Carrollton declared August 14 Dot McNabb Day. For this year’s Dot McNabb Day, the College of Education’s Department of Sport Management, Wellness and Physical Education commissioned a memorial plaque in honor and remembrance of “Miss Mac.” 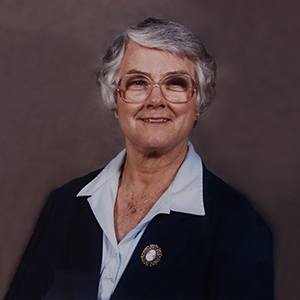 In 1953, McNabb joined then-West Georgia College as an associate professor of physical education, but her reach quickly extended outside the classroom as she became a pioneer for the school’s intramural department and women’s athletics. Her restructuring of the intramural program paved the way for the development of women’s intercollegiate athletics, and she made her mark as the first head coach for women’s basketball, tennis and volleyball.

Senior Associate Athletic Director Eddie Duffey said it was a privilege to have her as one of his professors.

“I always appreciated the great spirit that she brought into the classroom,” Duffey shared, “but also the positive influence she had in introducing intercollegiate athletics from a female perspective at our institution, and then the development of those programs into something that we can be proud of today.”

Throughout her career, McNabb received many accolades: she was named Volleyball Coach of the Year for three consecutive years in the Southern Women’s Athletic Conference; under her guidance, the 1976 basketball team was a finalist in the AIAW national tournament; she was elected as a charter member of the West Georgia Basketball Hall of Fame in 1988; and in 1996 the secretary of state honored her as an outstanding Georgia citizen.

Off the court, McNabb devoted time filling many leadership roles at the First Baptist Church, including serving as one of the first female deacons in the church and as director of the Women’s Missionary Union.

“She was a pioneer in many ways during her tenure here,” Duffey said. “Perhaps her greatest contribution was the keen personal interest she showed in each young person and coworker with whom she had a daily contact.”