Shoes. In developed countries such as the United States, they are considered accessories—even status symbols. But in third world countries, shoes can mean the difference between life and death. The University of West Georgia’s JoAnna Browning learned about this reality through Sole Hope, a nonprofit organization whose mission is to combat foot-related diseases in impoverished countries. As a teacher in UWG’s pre-kindergarten program, her love of children compelled her to do what she could to help.

One of the initiatives Sole Hope uses encourages people taking their old pairs of jeans and hosting a “shoe cutting party,” where attendees use patterns provided by the organization to destroy their once-beloved denims for a cause. From there, the pieces are sent to shoemakers and tailors who sew them together and apply tire tread to the bottom to complete the process. In 2014, Sole Hope provided almost 11,000 pairs of shoes to Ugandan people. 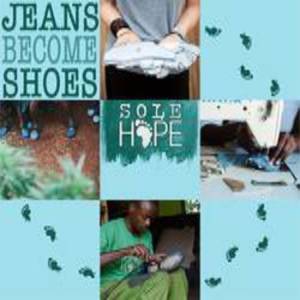 “This is a great way to help make shoes inexpensively for the children of Uganda, where the issue is sand fleas, or jiggers,” JoAnna explained.

Due to a combination of a lack of flooring and a shortage of footwear, jiggers can easily burrow into the expos skin and lay eggs. The eggs then have to be dug out, causing tissue damage and possibly fatal infections, such as gangrene and tetanus.

After attending her first event, Joanna felt compelled to host her own cutting party at UWG. Word spread to the community via word of mouth and social media. When all was said and done, the group cut enough pieces to make 51 pairs of shoes.

“A lady who saw the event posted on social media came to the party, and I didn’t even know her,” JoAnna said. “She brought one of her grandfather’s old pairs of jeans, and even though he’d passed away two years ago, she couldn’t bring herself to throw them away. She said he had a really big heart for missions, so she was ready to cut them up to make shoes for kids. She told me that is exactly what he would’ve wanted for his jeans.”