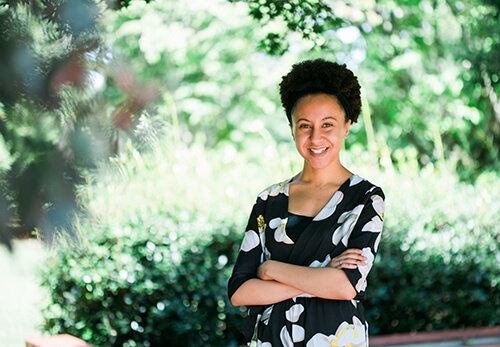 The Academic Recognition Day program honors students from the University System of Georgia based on their academic success each year. All undergraduate students chosen are residents of Georgia and represent outstanding scholastic achievements by acquiring a 4.0 grade point average.

Honorees like Davis, a chemistry major in the College of Science and Mathematics, received a letter of commendation from the USG chancellor and signed resolutions from the state Senate and House of Representatives.

Davis, who first enrolled at UWG in 2014, was the university’s chosen representative for this academic year. Davis has had her fair share of challenges in college, but she’s been able to overcome them through determination and perseverance.

“When I first started college, I wasn’t sure I was working toward the right goal, but now I see every hurdle as an opportunity because I love what I do,” Davis said.

She also passionately describes the feeling of being recognized for the award and chosen out of other well-qualified students.

“It’s always a great feeling when you work tirelessly toward a goal and see the positive outcomes of your efforts,” Davis said. “Being named an Academic Recognition Day scholar made me feel like people took notice of how hard I work every day to maintain a healthy and successful balance of school, work and social life.”

Davis enrolled at UWG as a biology major, planning to attend medical school after earning her undergraduate degree. She later found her purpose in the Department of Chemistry and was able to persevere and continue her educational journey.

“I cannot put into words how happy I am that I stayed at UWG,” said Davis, who originally planned to transfer from UWG after earning a couple of years’ worth of credits. “Not only was I able to save money and stay close to my family, but I also met some of the most amazing people – both peers and faculty mentors – and was able to find what I consider my life’s calling.”

Davis said attending UWG allowed her to get involved in undergraduate research and discover that she’d like to pursue a Ph.D. in chemistry. So far, she’s been accepted to several graduate programs, including one at Princeton University.

Davis said earning the Academic Recognition Day award came at a “perfect time” in her life.

“As I’ve been traveling to different graduate schools, I’ve felt a sense of impostor syndrome when I go – like I’m not good enough to attend these schools,” Davis concluded. “Earning awards like this one helps boost my confidence and make me feel like I’m on the right track for my future.”