by Julie Lineback and Bonnie Butcher 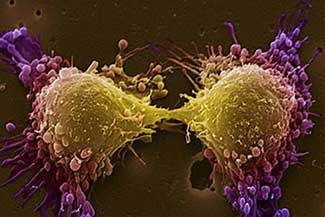 Every generation makes strides in the fight against cancer. From the discovery of radiation to the development of chemotherapy, bone marrow transplants, and stem cell therapy, treatments are developed, refined, and combined to combat the tumors, of which there are over 100 types. Today, institutions like the University of West Georgia are shaping students to help make that next big step.

Student Publishes Research Paper on Possible Anti-Cancer AgentsAustin Gann ’15 was at the forefront of this research at UWG. From Spring 2013 to Summer 2015, he worked with Dr. Partha Ray in his organic chemistry lab. During the summer semester of 2013, Austin was assigned his first research project—the development of synthetic strategies potential anti-cancer drugs.

Tumors form when the mechanism that controls cell division malfunctions and causes the cells to divide continuously. From there, the tumors become either benign, meaning they don’t spread to other parts of the body, or malignant, meaning they do spread to other parts of the body. Because those cancer cells are dividing constantly, the demand for the building blocks for DNA, the genetic material, is higher than that of normal cells.

Austin and Dr. Ray used small commercially available molecules that they modified and attached together in very specific ways to make a larger model compound that will be used as a template to prepare a number of novel anti-cancer drugs, designed by Dr. Ray. This process of manipulating molecules, referred to as molecular engineering or synthesis, is a time consuming and laborious process as it involves carrying out many laboratory experiments including purification and spectral analysis of the isolated products.

After the model compound was developed, Austin and Dr. Ray recently published their synthesis in the peer-reviewed international chemistry journal Heterocyclic Communications. Dr. Ray and his current students (Austin Davis, Robert Lovvorn, and Alexandria Webber) are now using the methodology to prepare target drugs that may prevent the biosynthesis of purine and pyrimidine nucleotides, the basic building blocks for DNA, therefore slowing down the rapid division of cancer cells in the body without causing ill effects to the patient.

“The importance of discovering new and better drugs cannot be overstated,” Professor of Chemistry Dr. Ray said. “The truth is that without drugs, healthcare professionals can do little to alleviate human suffering caused by diseases and disorders.”

Projects such as this one are made possible from UWG faculty research grants and the student research assistant program. Dr. Ray also said the chemistry department provides financial support to purchases the various chemicals and reagents, as well as laboratory supplies and equipment needed for the project.

“Research in experimental science is somewhat expensive, but regardless of the expense and overall success of the projects, the biggest winners are our students,” he said, “which undoubtedly helps to kick start their scientific careers.”

Five of Dr. Ray’s previous undergraduate research students now have Ph.D.s in synthetic chemistry, two have master’s degrees, and three are at various stages of their doctoral studies in graduate school. Another two are practicing doctors and one will soon obtain a MD-Ph.D., while another is close to obtaining her dental degree. Two others work at Southwire as polymer chemists.

Austin, who is currently in graduate school at Georgia State University working in a biophysical lab, said that working in Dr. Ray’s lab lit a spark in him and got him hooked on research.

“It wasn’t just about the mental stimulation that I got from having that excitement that I made something myself using all these reactions and logic I learned,” he said. “It made it really interesting to use the knowledge that I learned in class to eventually go and apply it to a problem in real life.”