Not all scientists are created equal. University of West Georgia chemistry dual degree student Louis Apraku-Boadi began his college career struggling in his math and science courses. This lack of understanding fueled Louis’ desire to learn more and dedicate more time to his studies, ultimately becoming the driving force to pursue a dual degree in chemistry and chemical engineering. 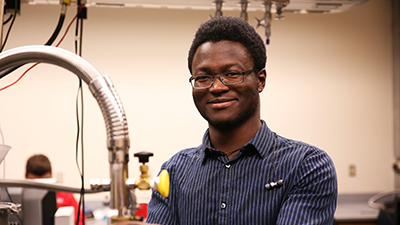 “When I first came to West Georgia, I had two things in mind,” said Louis. “I wanted to improve academically, and I wanted to improve professionally. I wanted to be able to interact with people from very different backgrounds. I wanted to understand science and math because coming from high school, I didn’t do very well in math and science. I pushed myself into the program and forced myself to learn the material. I think I’ve done very well.”

Three years from now, Louis will have a degree from UWG in chemistry and a chemical engineering degree from Georgia Institute of Technology. Louis completed his pre-requisite coursework during his time at UWG to prepare him for the academic rigor at Georgia Tech and will begin his majoring coursework as he transitions from UWG to Georgia Tech in the fall.

“The dual degree program allows students to build a strong foundation in the core courses that allow them to excel in the engineering program while at Georgia Tech,” said Dr. Sharmistha Basu-Dutt, department of chemistry chair. “In addition, they are able to enhance their resumes by participating in undergraduate research and leadership opportunities.”

Louis feels that he would not have been able to make it this far academically without the help from his UWG professors guiding him in the right direction. His advisor, Dr. Basu-Dutt, gave him the resources and opportunities needed to succeed in the dual degree program through the UWG chemistry department. Louis recommends to future students the power of visiting professors’ office hours if you are not comprehending the subject matter.

Louis is also an undergraduate research assistant in the laboratory of Dr. John Hansen working with lasers to build high powered optical switches. He mentioned the material could be used in the future to power computers. During his time as a research assistant, Louis learned how changing the smallest aspects of testing can create something one might have never found otherwise. A major aspect of these lab assistants is to learn a role of leadership in the lab setting and how to implement those skills into a future career.

“There is no way to prove this, but when I first came here, I was not like this at all,” said Louis. “I am way more confident now, and that is thanks to UWG. I’m confident socially and academically, and I feel great about myself. I feel like I can do any academic challenge, that is how UWG has prepared me.”