For Sir Arthur Eddington, the answer lie in the stars.

The English astronomer, physicist and mathematician traveled to the coast of Africa on May 29, 1919 to photograph a total solar eclipse. His goal was to test Albert Einstein’s theory of relativity, and the results ended up making the latter a legend of scientific proportions. 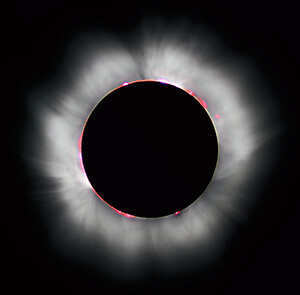 For the first time in a century, a total solar eclipse will cross the country on Aug. 21. Advances made in transportation, technology and communications since 1919 provide scholars at the University of West Georgia a unique opportunity to study Earth, the sun and their interaction. UWG scientists and students are set to make the most of this celestial event with a research trip near Lexington, S.C. The College of Science and Mathematics ’ Department of Physics also plans to host a community observation on campus at the UWG Observatory .

According to NASA , only 635 total solar eclipses occur during the 5,000-year span from 2000 BCE to 3000 CE. The last total solar eclipse to be witnessed in the continental United States was in 1979, but not many people saw because it clipped just five states in the Northwest and the weather wasn’t cooperative. You have to go way back to before our country was founded to find an eclipse that was exclusive to what is now known as America. For this reason, this year’s Aug. 21 event has earned a well-deserved title as the “Great American Eclipse.”

Although solar eclipses happen fairly often—two every year—total solar eclipses are rare. They occur only during the new moon, when the moon completely covers the sun and the resulting shadow crosses the Earth's surface. Factoring in the time zones, it is going to take around 90 minutes for the moon's dark shadow to cross the United States on Aug. 21, starting around 10:15 a.m. PST on the West Coast and ending around 2:45 p.m. EST on the East Coast.

“The moon has an inclination with respect to the plane of the Earth’s orbit that means there is not always a chance of one body casting a shadow onto the other,” explained Ben Jenkins, senior lab coordinator and associate director of the UWG Observatory. “Additionally, the moon’s orbit has a variation that moves it closer to and further from the Earth. This variation causes some solar eclipses to be total and others to be annular, where the moon is slightly further from us and cannot completely cover the solar disk, leaving a so called ‘ring of fire’ visible around the edges.”

Although the moon’s shadow cuts across Georgia during the eclipse, only a small area of the Northeastern part of the state is along its path of totality, where the sun is almost entirely covered. UWG faculty members visited several locations within traveling distance and discovered that a prime centerline spot happens to be only 1,000 meters from Lake Murray, S.C.—an area that is easily accessible to them. 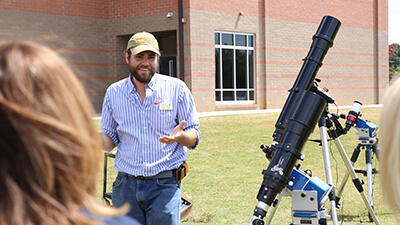 Dr. Bob Powell, professor of physics and director of the UWG Observatory, is leading the group to the path of totality and centerline with lecturer Ben Team. The expedition team will study and photograph eclipse effects.

While at this location, the crew also plans to replicate the Eddington experiment, an early 20th Century study that verified Albert Einstein’s theory of relativity and ushered in what we now know as modern physics. UWG is the only known higher education institute in Georgia to take advantage of this rare occurrence by using the advances in technology and equipment since the last total solar eclipse in the United States, therefore improving on those historic results.

Powell explained that during the total phase of the 1919 eclipse the moon blocked light from the ‘surface’ of the Sun, and the dark near side of the moon was seen against the inner corona—the solar atmosphere. Away from the solar glare, individual stars were visible in the photograph. Light from some of these stars passed though the distorted space near the sun and appeared to bend. This gravitational deflection altered the apparent position of those nearby stars. Stars some distance from the position of the sun were unaffected by the distorted space and were in their true positions. Their positions served as calibration points for the distorted stars.

When Eddington repeated the photographic study of the same star field six months later, all the stars were in their normal positions.

“Comparisons of the shifted positions of stars near the sun during the eclipse to their actual positions six months later verified Einstein’s predictions of gravitational deflection of starlight in the general theory of relativity to an accuracy of about 11 percent,” Powell explained. 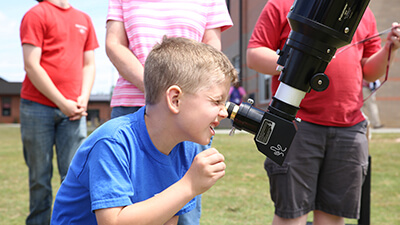 owell, who has witnessed two partial solar eclipses in the early ‘70s and an annular eclipse in 1984, retires in early 2018 with more than 50 years of service to UWG. He said he is excited about his final big project.

“Significant improvements have been made with digital cameras, the optical quality of small telescopes, and the mount and tracking of small telescopes,” he observed. “It may be possible to duplicate Eddington’s results or conceivably improve the accuracy of those measurements.”

Back on campus, the UWG Observatory will be open from 1-4:30 p.m. for a public observation of the eclipse. At mid-eclipse (2:33 p.m.), 95.5 percent of the solar disk will be covered. Onlookers have an unprecedented opportunity to experience Jupiter-like lighting conditions for nearly five minutes. In addition to performing several experiments, UWG is providing 10,000 solar eclipse glasses to UWG students and 20,000 to Carrollton and Carroll public school students so they can witness the spectacle safely.

“It is dangerous to look at the sun without proper equipment,” Jenkins emphasized. “However, with the correct equipment, such as a pinhole projector or solar eclipse glasses, it is a safe, enjoyable and memorable event.”