Dr. Andrew Edelman is the University of West Georgia’s version of Bruce Wayne. Instead of protecting Gotham City, he protects bats from white-nose syndrome (WNS). To aid in his efforts, he recently received $25,000 from the United States Department of Agriculture (USDA) Forestry Service to continue field research on WNS in bats. This is an additional grant to extend the $17,000 he originally received for this study. 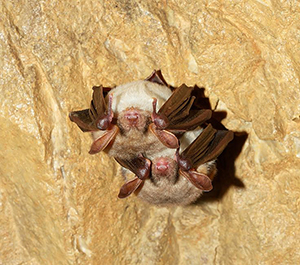 WNS is a disease caused by an invasive fungus that appears on bats’ noses.  It usually attacks bats that migrate in caves. In the eastern United States, WNS is very common, and the bat population is decreasing rapidly. Edelman and his assisting students hope to find a way to help stop WNS and prevent the loss of bats.

“This grant allows me to continue a project that I personally find meaningful and a lot of fun,” explained Edelman, an assistant professor in the Department of Biology. “We hope the information we are collecting will be useful in conserving bats across the region.”

The grant also provides great educational opportunities for the students who are working on the field research. Graduate student Kaitlyn Rountree is working on this project with Edelman as part of her thesis.

“This grant means a lot to me,” Rountree said. “It enables me to have another field season, which will further my research and increase my dataset, making my thesis stronger. I also have the privilege to work with the forest service for another summer, which will help conservation efforts on threatened and endangered bats that roost in the forest.”

Edelman and his students will be conducting their research in the Talladega National Forest in Alabama. By capturing the bats, placing radio tags on them and tracking their movement, he and his assisting students hope to save as many bats as possible.

“This research will help wildlife biologists understand how forest management practices impact remnant bat populations in the southern Appalachians,” he said. “We know that controlled burning and forest thinning benefits many wildlife species, but we aren't sure how our endangered bats respond to these practices. By tracking bats we can learn how they use different areas of the landscape for roosting and foraging.”