Jacob reads his father’s letter for the first time.

Jacob, who earned his degree with a dual major in chemistry and biology, is now on his way to Mercer University School of Medicine in Savannah. He read his father’s letter for the first time for a video shown at spring commencement featuring him and other first-generation UWG graduates.

Steven added, “I could not be more proud of you, son.”

Jacob Sudduth’s path to medical school did not begin easily. After graduating from Bremen High School in 2013, he began his post-secondary education at Southern Polytechnic State University, where his first semester ended with a disappointing grade point average (GPA).

“I had to write a letter to the dean of admissions here at UWG to be allowed to register for classes,” Sudduth said. 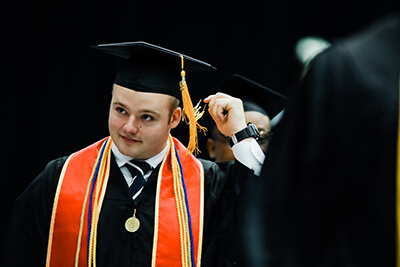 However, since admission to UWG, Sudduth has maintained a near 4.0 GPA. Sudduth then set his eyes on his goal of becoming a doctor. He never looked back.

Sudduth attributes his scholarly achievement to the support of the entire UWG chemistry department. Dr. Victoria Geisler in particular stood out for him. She served as both his academic adviser and faculty adviser to the Emerging Healthcare Leaders organization, for which Sudduth served as president.

“If you are a chemistry student planning to attend medical school, Dr. Geisler will be your adviser,” Sudduth said. “She helped me choose classes and gave me invaluable direction. She’s really good at her job.”

Reflecting on his undergraduate years, Sudduth feels finding the right fit at UWG is what allowed him to succeed. UWG provided the opportunity to be himself while at the same time standing apart from the crowd.

“As a first-generation student, that feeling of comfort at UWG really helped,” Sudduth said. “The chemistry department is like family. It’s a second home.”