Dr. Jeong Seong is putting the University of West Georgia’s geosciences department “on the map” with a grant-funded project designed to investigate and catalog Georgia’s changing environment.

Provided by AmericaView – a consortium of 41 state projects funded by the U.S. Geological Survey (USGS) – the $23,000 award will recur annually over five years. This is Seong’s third such five-year project while serving as director of GeorgiaView, the AmericaView state affiliate.

Using both existing satellite data and his own data collected by unmanned aerial vehicles – UAVs, commonly referred to as “drones” – Seong is analyzing land cover information that tells the ever-changing story of the face of Georgia.

“This method of remote sensing provides detailed information that we can analyze to understand changes in land use,” Seong said. “We look at crops, pastures, woodlands, urban areas, rivers and much more. We look very closely at population changes.”

Changes in the landscape, and perhaps particularly population growth, greatly impact the state as a whole. That is why Seong’s goal is to provide his findings to policymakers in a colorful, easy-to-understand atlas.

“We will create 50 copies of the atlas to send to authorities who can use the information for state and urban planning,” Seong said. “These will include the Atlanta Regional Commission, the Georgia Department of Transportation, the Georgia Environmental Protection Division, congressional representatives and others.”

With a Ph.D. in geography and an emphasis on Geographic Information System (GIS) technology, Seong is the right person to take on the challenge mapping Georgia’s dynamic landscape. That is not to say that he didn’t need help, and that’s where our UWG undergraduate researchers come in.

Meet Daniel Moye and Jordan Woodall, both juniors in the Department of Geosciences at the College of Science and Mathematics. Each found the right fit at UWG as undergraduate researchers in Seong’s expansive GeorgiaView project.

Moye graduated from Brentwood School in Washington County, Georgia. Majoring in geography, his academic focus is firmly set on GIS technology. His research combines cartography with a touch of graphic design as he assists in creating maps for the GeorgiaView atlas.

“The challenge is in designing and laying out maps for non-experts,” Moye said. “For greatest impact, I want viewers to easily understand this highly complex data visually, with just a glance.”

Using intricate ArcMap and ArcGIS software to build his maps, Moye turns to Seong frequently for his expertise and patient mentorship.

“We could spend years studying the software, and he would still know tips and tricks that we don’t,” Moye said.

While mapping the state of Georgia is a massive enough project, Moye has his eyes set on international uses for all he’s learned.

“After graduation, I would like to work for a government agency such as the NSA,” Moye said. “GIS is an integral part of intelligence gathering. From assessing foreign military power to understanding if a nation has enough crop yield to sustain its population, remote sensing is a vital piece of national security.”

Woodall, from Worth County High School in Sylvester, Georgia, is likewise a junior in geography with a focus on GIS. She chose UWG for its campus life, science programs and distance from home that gave her independence while also being only a day trip away.

She explored various science courses before settling deciding to make her mark in geosciences. Now, working with Seong on this innovative grant research project, she has definitely found her home.

“I learned many of the skills needed to create the atlas in my classes,” Woodall said. “Applying what I learned to a real-world project with hands on application takes my understanding to the next level.” 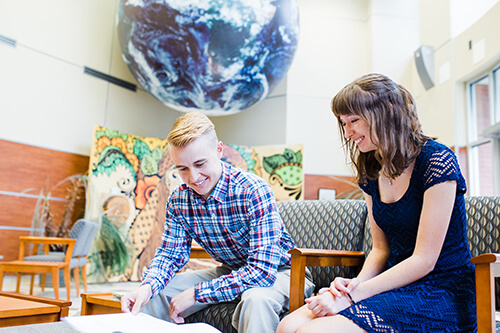 Woodall sees a career in government as a way to continue her public service while also serving as a gateway to graduate school.

“I want to continue my studies in GIS at the graduate level,” she said. “In some instances, working for the government can provide tuition reimbursement that will allow me to achieve that goal while doing interesting, useful work in my field.”

While Moye and Woodall have certainly gained from the experiential learning opportunities offered by UWG, the public benefits directly from these research opportunities as well.

“People often underestimate the percentage of urban area in their area or county,” Seong said, adding that accuracy in such information is vital to communities. “For instance, impervious surfaces such as concrete prevent rainwater from seeping into the ground so that it has nowhere to go but rivers and streams, which can lead to flooding.”

Seong sees the atlas as an important means of making this kind of information available in a simple form for better-informed policy-making.