Not much is known about the universe. How were the planets created? What are they composed of? This is what NASA’s Juno mission to Jupiter intends to answer, and University of West Georgia’s Dr. Nicholas Sterling recently shared with an eager crowd the groundbreaking discoveries this mission could make. 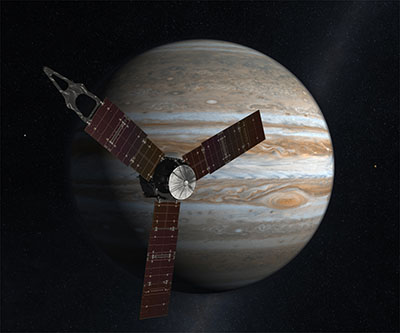 As part of his Infinite Universe lecture series, Sterling discussed NASA’s Juno mission from its inception in 2011 to its arrival at Jupiter in July 2016. Juno will study Jupiter’s composition, gravitational and magnetic fields, as well as provide insight on how Jupiter and other planets in our solar system formed.

“With astronomy, you can really draw people in, and there are so many amazing stories to share,” Sterling said. “This topic was based on something that was meant to be timely, and with so many fascinating discoveries that I want to share, this one just fell into my lap.”

His lecture was open and free to the public, and many in attendance traveled from local areas, such as Bremen, Douglasville and Newnan. Even though he does promote his lecture series to his students and on campus, Sterling’s target audience is the community.

“My lectures are meant to be public outreach efforts,” he said. “This gives people who may have looked up at the night sky and ever wondered the chance to learn awesome, new things that not everyone knows.”

Sterling learned a few new things himself. Not following the Juno mission until it reached Jupiter’s orbit in July, he finally understood how gravitational movement is measured. One thing that really impressed him was the technological feeds of the mission and the high efficiency of the solar panels.

“One thing I like doing with these talks is choosing a topic I don’t know a lot about,” he said. “Juno was a big bite for me because of the amount of research and the amount of information that needed to be condensed.”

Sterling has experience with NASA. He completed a postdoctoral fellowship at the NASA Goddard Space Flight Center, so he understood the level of work that goes into these programs when he started his research on Juno.

Even though Sterling cannot cover the full details of his lecture topics in the classroom, he does share with his students any significant findings. He believes that his lectures can be beneficial to students and anyone who is willing to learn because they are absorbing new information about science, technology, education and mathematics.

“If students attend my lectures for extra credit, so be it. That’s a win,” he said. “They are learning, and it’s improving STEM education, and that’s good enough for me.”