The title “Molecular characterization of two high light sensitive Chlamydomonas reinhardtii mutants…” might not mean much to non-biologists.

But, what if the groundbreaking research behind this paper could lead to better vitamins or more cost-effective, green energy biofuels? Suppose the young scientist awarded to perform this study was a first-year student who had never taken a single college level biology course.

Such is the case of University of West Georgia’s Kenneth Kim.

“A friend came by saying the lab needed a new research assistant,” recalled Kim, a graduate of Chattahoochee High School northeast of Atlanta. He jumped at the opportunity provided by UWG’s STEM Education Enhancement Plan (SEEP) and the Louis Stokes Alliances for Minority Participation (LSAMP) to perform research his freshman year under the mentorship of a senior.

“When I looked around it was pretty intimidating,” Kim laughed. “It was my first time seeing a university biology lab!”

Dr. Mautusi Mitra—associate professor of biology and head of the Mitra Lab, a career mentorship program for biology students—saw great potential in this first-year student.

“He was looking for research opportunities when he was a freshman, and that is very rare,” said Mitra, noting that many students focus on coursework but neglect building experience. 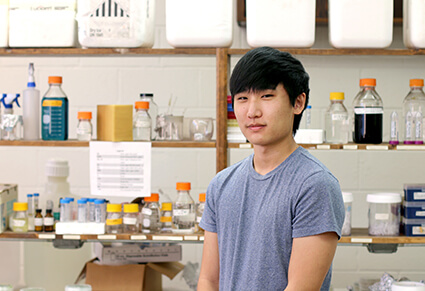 Mitra noted Kim’s lab work and soon encouraged him to apply for the 2017 Summer Undergraduate Research Fellowship (SURF) from the American Society of Plant Biologists (ASPB). Winning the award could fund his lab research through the approaching summer.

“This is a very prestigious award, and I did not know he was going to get it,” Mitra said. She saw the application process itself as a learning experience for Kim. “This is really tough because you have to compete with major, research-intensive schools.”

“I didn’t expect much because I was a freshman,” Kim said of receiving notice that earned the award. “I was shocked.”

The award included funding for equipment and a $4,000 stipend that allowed Kim to work at the UWG Mitra Lab over summer. There, he continued his research into characterizing a novel gene discovered in algae that provides protection from sunlight intense enough to damage other photosynthetic organisms. Understanding this gene raises the potential of increased productivity in an array of biotech industries.

Mitra, whose work in improving photosynthetic productivity in bioreactors led to U.C. Berkeley patenting one such gene, expresses importance of the project.

“This is a huge thing. This is the era of functional genomics," she said. "Every gene will be sequenced, but what it is doing is very hard to figure out if it is a novel gene.”

“The summer fellowship really helped me to learn more about what was going on,” said Kim.

Along with summer work at the lab, found himself hitting the biology books to fully grasp his research. With the fellowship concluded, he now prepares to present his findings at Plant Biology 2018, an international ASPB convention held in Montreal next summer.

“I’m very excited but nervous too,” Kim said at the idea of presenting before such a large conference.

Fortunately, he will have experience beforehand by sharing his findings at the Georgia Undergraduate Research Conference hosted by Georgia College and State University.

As for graduate school, he hasn’t thought much about that yet. His primary interest during his first year was in biomedical, but he finds his interests turning increasingly to plant biology.

It’s so easy to forget that this is only his second year of college.