A distinct pride resonates though campus when an alum “Returns West” to pursue his or her career. 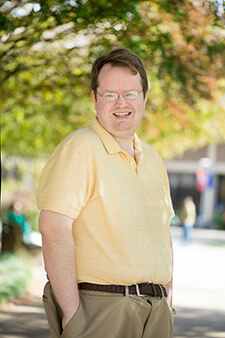 In the case of University of West Georgia alum Dr. Logan Leslie—assistant professor in chemistry since fall of 2017, following two years as limited term instructor—this sense of homecoming is not limited to his decision to instruct here. His voyage full circle has an even deeper meaning once you know his history.

Leslie first discovered his interest in science in the seventh grade while watching a 20/20 news segment on viruses.

“I was like, ‘I’m going to be a virologist!’” Leslie recalled.

With science, technology, engineering and math (STEM) education awareness on the rise, Leslie’s interest gained notice at his school. He soon found himself performing research work with Dr. Andrew Leavitt, a professor of chemistry at UWG at the time. This lab opportunity lasted for five summers and influenced Leslie’s choice in where to attend college. After doing real-world research, he didn’t want to just sit in a classroom.

“I realized that if I wanted to get started in a lab right away, I should come to West Georgia,” said Leslie, who had scholarships waiting at Wake Forest and Emory. “I knew I would get a lot of support at UWG. Here I could hit the ground running.”

That early start in research at UWG afforded Leslie a strong advantage. He had given more than a dozen presentations by the time he graduated, not having to wait to prove himself as a student before getting into the lab.

“University of West Georgia supported me really well," he said. "I got to do summers at Stanford and Indiana, both while I was here.”

“I found that once you took the working with students part out of it, I didn’t like it as much,” Leslie said. “I realized I was mostly interested in the research parts because they are good ways to teach science.”

Once he earned his master of science degree, Leslie took a year off to consider the change he wanted to make. Firm in his decision, he moved to the University of Georgia to earn his doctoral degree in science education.

After graduating, an opportunity in chemistry arose at UWG. Here is where Leslie returns—not only to the university, but to what he loved about science from the start. He knew from his own years here that UWG offered opportunity to work with undergraduate students. He could help students “hit the ground running” in science research as others had helped him since the seventh grade.

“What if you want to do research in how we teach science to people?” Leslie asked, and he saw UWG as the obvious place for him to conduct such research. “That’s one of my goals here now. I want to learn about how I can help more people have an experience closer to what I had.”

In fact, Leslie meets with students to discuss and dissect research articles. While these meetings are not required for his chemistry courses, he sees these gatherings as an opportunity to engage authentic scientific work while he considers what encourages students in the sciences. Or, in his words, “What encourages people to get there?” He intends to formalize such questions into a research project in the spring.

So, what brought Leslie full circle back to UWG? The university itself, of course. But the journey, for him, is both personal and professional. His joy is plain to see.

“I knew as a student here that the faculty were really supportive of students, and that mattered. Some places aren’t," he said. "At West Georgia, I get to work most closely with the undergraduates. I love that part so much. I like working with students who are still figuring out where they are going. It is so much fun.”