After an introductory lesson by Dr. Jeong Seong, professor of geospatial technologies in the University of West Georgia's geosciences department, he led the Saturday workshop group outside. Most of us brought jackets and umbrellas because it had rained all morning. 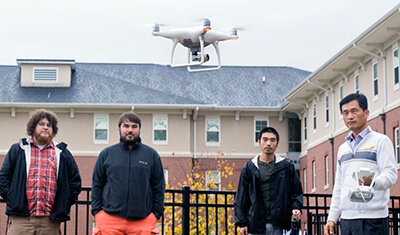 With good fortune, the winds calmed as we made our way to the launching area, and a pale sun peeped through the clouds. In that brief calm, our drone came whirring to life. All eyes followed as it lifted into the sky for a bird’s eye view to photograph portions of the UWG campus. The quadcopter returned minutes later, and we gathered up the drone to rush inside as the wind and rain picked up again.

You might expect a weekend drone workshop to teach you how to maneuver remote-controlled, unmanned aerial vehicles (UAVs) – commonly referred to as “drones.” But the flight path of our rotary wing drone had already been programmed. The day's workshop – Mapping with Drones – wasn’t about the drone itself or really the photographs it took. It was about what we could do with the images when combined with other data gathered in flight.

“We have 25 software licenses for Pix4D,” Seong explained, referring to the Geographic Information System (GIS) software we employed to create three-dimensional maps. “In the old days, the focus on mapping was to design a map. Nowadays, mapping is not only visualizing something, but managing geospatial data.”

The mapping software uses the sort of visual information we are all accustomed to from aerial photography. But it gathers geospatial information as well, including GPS data of longitude, latitude and altitude.

One can, therefore, from a computer monitor, use the software to measure lengths, widths and heights of chosen territories and objects to precision within millimeters. Given this three-dimensional capability, one can even measure the volume of masses such as cars, buildings or other structures.

Supported by GeorgiaView, UWG GIS Club and the UWG geosciences department, the workshop attracted attendees interested in using the technology for a wide array of human benefits. These included for traffic and roadway analysis, city structural planning and topography for geologic studies.

In fact, the career fields where photogrammetric software such as Pix4Dmapper can be applied seem almost limitless.

We may think of applications by police, military or surveying as used in agriculture or related land management. But, drone technology likewise has advanced access and accuracy in obtaining valuable geospatial data across seemingly unrelated fields.

“In the biology department, people are using GIS really heavily because managing biological data sets is always associated with location,” Seong explained. “The anthropology department has GIS applications for use in excavating sites. Even the political science department uses GIS data for planning purposes. We have a continuous flow from those departments to use our GIS technology.”

For his part, Seong is working in using 3D modeling in furtherance of sustainable, solar energy production.

“Traditionally, we had a ground terrain model, which ignores things like buildings and trees. With drone images, we can create what we call a digital surface model, where we estimate the amount of solar power potential more accurately. Based on the 3D model, we can calculate the solar energy amount more accurately.”