If you draw a map of the world on a flat surface or plane, painting in countries as you go, what is the least number of colors needed so that no two nations of the same color share a border? 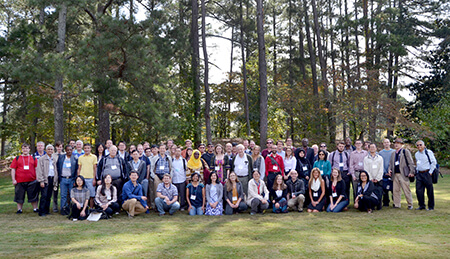 The puzzle is deceptively simple. “Four color theorem” – the riddle’s answer lies in the name – was not proven until the 1970s and, then, with the assistance of a computer.

Welcome to combinatorics as introduced by Dr. Abdollah Khodkar, professor of mathematics at University of West Georgia.

“Combinatorics has application in networks consisting of a finite number of objects,” said Khodkar.

Finding the most efficient arrangements of computer chips, understanding DNA sequencing and enhancing social networks on Facebook rely on this branch of discrete mathematics – math dealing in finite, countable numbers.

UWG recently hosted the 31st Midwest Conference on Combinatorics and Combinatorial Computing (MCCCC31), attracting participants from Canada, China, Indonesia, Japan, Uganda and United Arab Emirates as well as from across the United States.

“There were 75 participants and five speakers,” Khodkar said.

The speakers were Fan Chung (University of California, San Diego), Peter Dukes (University of Victoria), Chris Rodger (Auburn University), Douglas West (Zhejiang Normal University and the University of Illinois), and Catherine Yan (Texas A&M University). Of the 75 participants, 56 of them contributed 20-minute talks in their areas of expertise.

Arranging for and funding such a distinguished event was no small task. Dr. Khodkar formed a planning committee with other members of the mathematics department including Drs. Xiafeng Gu, Jeong-Hyun Kang, David Leach and Rui Xu – each scholars of discrete mathematics. Khodkar also wrote and earned a National Science Foundation grant for $18,750, providing travel and accommodations for many of the attendees including seven undergraduate students, 14 Ph.D. students, nine early-career mathematicians, and the five speakers.