Hundreds of students and community members of all ages recently filled one of UWG’s largest lecture halls to learn about NASA’s James Webb Space Telescope (JWST). The talk, hosted by the College of Science and Mathematics (COSM), was given by Dr. George Sonneborn, NASA Goddard Space Flight Center emeritus. 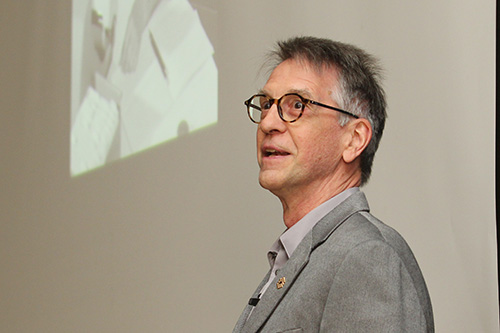 “It was our great honor to invite and host the amazing talk given by Dr. Sonneborn,” said Dr. Pauline Gagnon, interim dean of COSM. “Rarely has the College of Science and Mathematics hosted such a renowned scientist of his caliber.”

Sonneborn started work at NASA Goddard Space Flight Center in Greenbelt, Maryland in 1982 as a resident astronomer in the Science Operations Center of the International Ultraviolet Explorer.

Prior to joining the JWST project, Sonneborn was the project scientist for the Far Ultraviolet Spectroscopic Explorer mission from 1988 until 2009. FUSE was a NASA Explorer mission used by thousands of astronomers to study stars, galaxies, and the gas between them.

Beginning in 2005, Sonneborn was the NASA project scientist for operations for the JWST at the Goddard Space Flight Center.

The JWST will complement and extend the discoveries of the Hubble Space Telescope. It will be the largest telescope ever placed in space. The large-aperture, cryogenic, infrared-optimized space observatory is undergoing final testing by NASA for launch in 2021. It will allow astronomers to find and study the first galaxies that formed in the early universe and see star and planet formation at high spatial resolution.

“It was a pleasure to speak to the UWG community about the Webb telescope,” said Sonneborn of the talk. “It was very rewarding to have so many really good questions about the telescope and astronomy.”