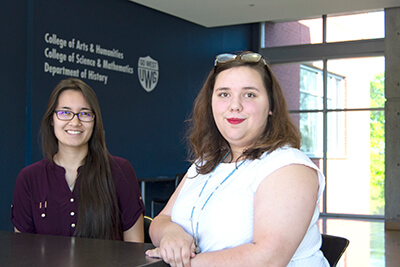 Anyone with a social media account sees a dozen animal pictures each day. But that doesn’t come close to the nearly 10,000 critter photos that University of West Georgia biology majors Joanne Wasdin and Thalia Young examined during spring semester.

They do it in the name of science.

Wasdin and Young called their project “Strike a Pose: Using camera traps to understand coexistence among terrestrial animals.” Working under the guidance of biology professor Dr. Andrew Edelman, the undergraduates analyzed images taken by over 200 camera traps set up during a six-month span across public lands in Alabama.

By analyzing the images, Wasdin and Young can gain a better understanding of which species thrive in distinct areas, their temporal habits – such as the times of day or night they are active – and territorial interaction and avoidance between species.

Young explains that while two species may share the same territory and ecological niche, they often avoid conflict by “partitioning” their time. That is, they are each active at different times of day. On the other hand, Wasdin and Young found that feral pigs were active at the same times and locations as herbivores.

“This signals that the feral pigs may be competing with the native herbivores,” said Young, a junior focused on pre-veterinary studies.

This is just one example of the findings in this ongoing research.

Young has a long-standing interest in animal preservation and rehabilitation programs. She began volunteering in wildlife education and preservation when she was 8 years old, working her way to internships and paid positions through high school.

Today, her dream is to work with the Smithsonian National Zoological Park near the nation’s capital. Veterinary school will allow her to pursue this passion for animal conservation, and Young credits UWG for placing her on this path for success.

“The opportunities UWG provided me are amazing,” Young said. “The professors are hands-on in getting their students involved at an undergraduate level. That’s something you just don’t see at the larger universities.”

A senior in biology with a concentration in secondary education, she describes herself as someone equally passionate about “doing science” as she is about teaching science.

That’s why she found the right fit with UWG’s UTeach program in the College of Education. As one of only three universities in the state selected to use the UTeach model, UWG provides Wasdin with the opportunity to focus on her science major with meaningful, scientific research while at the same time gaining certification to teach biology.

“It’s a great opportunity for someone as interested in science as she is in teaching it,” Wasdin said. “I will have a background as a professional in science. I will have done the research, and I will be able to share my hands-on experiences with my students.”

Dr. Andrew Edelman, Wasdin and Young’s mentor, is no stranger to the importance of research in science. A recent grant of more than $50,000 from the State of Alabama Department of Conservation and Natural Resources currently funds his study of eastern spotted skunk habitats in south Alabama.

He credits his own undergraduate research for nurturing his interest and enthusiasm for biology, a service he passes onto his own students at UWG today.

“Undergraduate research is critical because it teaches you what science really is,” Edelman said. “Science isn’t about sitting back and being bombarded with facts. It’s about discovering new information and applying it to important issues.”

Edelman initially had a graduate student working on the data analysis of the thousands of pictures, but that student became tied up with other aspects of the research. The job was both complex and large, and Edelman wasn’t sure if he’d find someone able to take on the role. Then he met Wasdin and Young.

“They really went after it,” Edelman said. “Finding someone who can do the actual hard science, from organizing the photos to the data analysis, is not always easy. Joanne and Thalia had that focus. They really knocked this project out of the park.”

Experiential learning in UWG’s College of Science and Mathematics doesn’t end with the research itself. That hands-on learning goes to the next level with having students present their research to stakeholders and the community, a highly in-demand skill in today’s job market.

Wasdin and Young did just that, presenting their work at UWG’s highly successful 2018 Undergraduate Research Conference. Along with dozens of other students from all academic areas, they presented a poster detailing their methods and findings and discussed their work with colleagues and the community.

Both Wasdin and Young will continue their research over summer and into fall semester.

“Dr. Edelman was amazing to let Joanne and I be involved in this research,” Young said. “At UWG, there’s the opportunity for individualized attention and academic connection with the professors.”