Each semester, Dr. Bob Powell learns all his students’ names before the first session ends. For large classes, he learns the names overnight. This determination isn’t merely the product of a sharp mind, but of a lifelong commitment to sharing the wonders of science at a personal level.

Dr. Bob Powell, professor of physics and director of the University of West Georgia Observatory, will retire soon after 50 years of service. In that time, he has worked as chair of the Department of Physics, directed countless student projects, worked extensively with in-service teachers and served as faculty advisor for the Phi Kappa Chapter of the Chi Omega Sorority.

“Growing up on a farm in south Georgia, there were not many opportunities to experience science,” said Powell. He recalled asking his eighth-grade teacher a question about atoms. “He didn’t know the answer and, furthermore, he didn’t seem interested in finding the answer. It’s a wonder that did not kill my interest in science.”

Yet, what young Bob Powell lacked in encouragement early on, he made up for with insatiable curiosity. He learned geography from maps, experimented with a magnet, searched for fossils and read voraciously, including about the Mesa Verde cliff dwellings, later visiting them on a trip to Colorado in 1995.

High school teachers further stimulated Powell’s enthusiasm for science and greatly influenced his teaching style through demonstration and hands-on activities. He discovered his fondness for teaching while obtaining his Ph.D. from Clemson University. Here he also met his future wife. As fate would have it, her father was an amateur astronomer who invited Powell to his observatory.

“It was through his telescope that I first saw Jupiter, Saturn and the Orion Nebula.”

Fresh from Clemson, Powell became an assistant professor at UWG. He shared a cramped geology workroom in the Callaway Building with two other professors and realized the need to grow. After moving to the Boyd Building the following year, Powell wrote a National Science Foundation grant to obtain equipment to begin a research program.

“We realized we needed to appeal to non-science people, so in 1969 we started an astronomy course,” he recalled. “I was the only one who’d ever looked through a telescope, so I was designated to teach that course.” 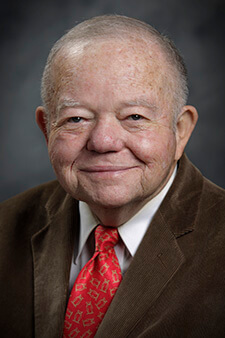 This commitment to public outreach and hands-on lab experience, Powell explained, is what sets UWG physics and astronomy apart from programs at other colleges.

“We are a relatively small department, which means we have outstanding interaction with our students,” he said. “Students have the opportunity to do research.”

This includes the opportunity to acquire and analyze data, modify instrumentation and, as a goal for all projects, present a paper at a professional meeting.

“We have some students who actually get publications,” Powell proudly added. “West Georgia is user friendly. We involve our students, and we encourage them to work for the department as either as a lab or observatory assistant. We just have a lot of outstanding opportunities that I did not have as a freshman.”

A very public example of this student-centered approach came last August when Powell and lecturer Ben Team led a group of student scientists to Lake Murray, S.C. to conduct experiments during the recent solar eclipse. While the data is still under analysis, this was not Powell’s first encounter with an eclipse or related astronomical phenomena.

“On March 7, 1970, I and members of the Physics Club got up early and traveled toward the path of totality between Statesboro and Savannah,” Powell recalled of one solar eclipse expedition, only to be met by a cloudy day.

Then, on July 10, 1972, he tried again with his wife and two children, traveling to Canada to experience a solar eclipse in totality. Once more, the weather did not cooperate.

Yet, before the success of this past summer, Powell found delight in lunar eclipses, an annular solar eclipse—where, for 12 seconds, only 1 percent of the sun was visible—and transits of both Mercury and Venus.

Still, looking back over his career, Powell reflected on more his earthbound connections at UWG.

“When I prepared to be a faculty member, I resolved I was going to be involved with my students,” Powell recalled. “I was going to know their names and support them in their activities.”

He went to art exhibits, concerts and athletic events–anything that involved his students. Then, in the fall of 1971, a number of young women in his class appeared with the symbols of the Chi Omega Sorority.

“One of the students, Janet Teague Daniels, invited me to go to a flag football game,” Powell said. “They were just amazed when I showed up that afternoon. On the following Monday evening, I received a phone call. The Chi Omega Sorority asked me to be their faculty advisor.”

Powell served that role for five years and regretted when he resigned.

“In 1999, an opportunity presented itself to come back into the life of Chi Omega,” he said. “I have been faculty advisor since that time, and three times I have been named Advisor of the Year for all student organizations.”

After 50 years of dedication to his students in higher education, Dr. Bob Powell retires at the end of this year. UWG will hold a retirement celebration for him Friday, Nov. 3 from 3 to 6 p.m. in the Campus Center at the campus ballroom.