Fifty of the region’s bright-minded middle- and high-school students recently competed in the 21st annual West Georgia Regional Science and Engineering Fair (WGRSEF) hosted by the College of Science and Mathematics (COSM) at the University of West Georgia.

The fair – organized by Dr. Sharmistha Basu-Dutt, chair and professor of the Department of Chemistry in COSM – is just one of many examples of UWG’s commitment to STEM (science, technology, engineering and mathematics) education in the region.

More than 40 projects were presented, granting students the opportunity to showcase their original research and engage with top-level professional scientists from the UWG community.

Many of UWG’s undergraduate researchers from COSM joined to make the event even more memorable for participants. In a separate session, they presented their own research, providing the middle- and high-school students a taste of the sort of advanced opportunities awaiting them at UWG.

“The active participation of faculty, staff and students fully embraced our mission to make a direct and positive impact in the West Georgia region and beyond through community engagement and public outreach,” said Dutt.

This year’s projects ranged from “How Permanent are Permanent Markers?” and “Can Technology Hurt You?” to studies in food science, 3D printing, and much more. Fifteen volunteers – including UWG faculty and staff, graduate students and professionals from the local industry – comprised the group of judges.

The highest scoring projects will move on to state finals before potentially competing internationally in the Intel International Science and Engineering Fair.

All participants made a great achievement by getting as far as the regional competition, having earned their way through school and county fairs.

“Winning science fair projects showcase a student's work over several weeks and sometimes several months,” Dutt said. “Projects advancing to the Georgia Science and Engineering Fair have a good research question, a thorough experimental design, a substantial amount of data collected and analyzed [and] a conclusion based on the evidence collected.” 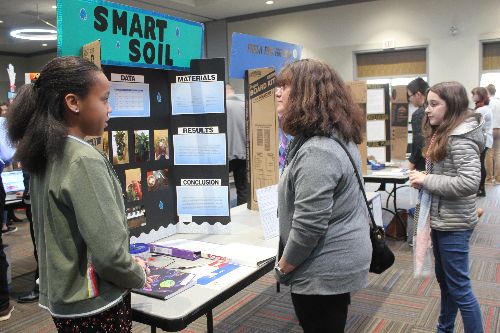 That was certainly the case at WGRSEF. Fifty percent of the projects presented will move on to the state-level competition.

Judges awarded winners in several categories. This year’s high-scoring participants each received a small ribbon. The top student project participants were awarded large rosette-style ribbons and had to meet the high standards of the fair as a whole. The top senior and junior division projects received crystal plaques for their achievement.

Edward Kenyon, of Carrollton Junior High School, earned the top score in the junior division with his project titled “Salt is Extremely Deadly! If you are a Bacterial Cell, That Is” which used optical density measurements to study the effect of sodium chloride concentration on the growth of bacterial cells.

Samuel Michael Erben, of Oak Mountain Academy, presented the top senior division project titled “A Trip Through Space: Part 2” which focused on computational modeling to accurately calculate the mass and volume of fuel needed for rocket missions to another planet.

The following winners from WGRSEF will be attending the state science and engineering fair held at the University of Georgia on March 26-28, 2020.