Undergraduate of physics student Lilly Matteson discovered bold, new opportunities when she decided to “Go West” by coming back east. Formerly dual enrolled at the University of West Georgia while in high school, the Villa Rica graduate attended classes out-of-state for a short time before she realized that UWG had opportunities that she couldn’t find elsewhere. 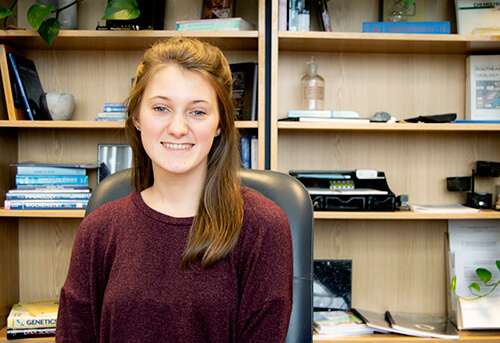 “UWG is unique in its approach to education through hands-on learning,” Matteson said of her return. “We’re not ‘old school’ in learning only through lecture.”

She found the right fit with the College of Science and Mathematics at UWG, advancing rapidly in her learning and achievement. She discovered a mentor in Dr. Nicholas Sterling, associate professor of physics, who recruited Matteson to assist in his research of planetary nebulae.

This January, and still in her junior year, Matteson presented those research findings at the 233rd annual meeting of the American Astronomical Society (AAS) in Seattle, Washington, one of the largest gatherings of professional astronomers in the world.

“Support and funding made this experience possible for me,” Matteson said, referring to assistance from the National Science Foundation through its Research Experiences for Undergraduates (REU) program as well as UWG’s own Student Research Assistance Program (SRAP) and a College of Science and Mathematics Summer REU award funded by an alumnus. “The College of Science and Mathematics has helped me every step of the way.”

Her research project entails analysis of extremely high-resolution images of planetary nebulae collected by Sterling at the McDonald Observatory while he was at the University of Texas. The images depict the expanding and often colorful emissions of ultra-massive stars late in their lives. Within them, Matteson sought conclusive evidence of heavy elements – elements heavier than those created through a younger star’s normal process of nuclear fission.

“When I first met Matteson, she was a dual enrollment student in my introduction to astronomy class,” Sterling said. “She stood out as one of the top students. When she came back to UWG as a physics major, I was happy to bring her into the research project.”

Matteson’s analysis helps provide insight into how rare, heavy elements are produced in the universe. Since each element has its own unique “spectral fingerprint,” the researcher can detect which elements are present in the various nebulae. This process of evaluating emission lines – called spectroscopy – depended in part upon code written in Python.

“With no previous programing experience, Matteson vastly expanded and improved the Python code in order to measure all elements detected in these nebulae,” Sterling said.

Matteson’s findings validated the existence of heavy elements within the observed nebulae. She presented her finding at two separate poster sessions at the AAS gathering in Seattle, honing both her knowledge and her ability to present before subject-matter experts.

“It was a great networking experience, meeting graduate and undergraduate students in my field as well as visiting the graduate college fair,” Matteson said. “It was motivating seeing where I could be in be in 10 years and knowing I am working for is going to be worth it.”

Matteson has an eye toward a graduate degree in astrophysics.

“I’m particularly interested in the study of our solar system,” she said. “There is so much to learn right here in our own planetary neighborhood.”