When asked what college year he is, Trevor Banks says he’s an untraditional freshman. 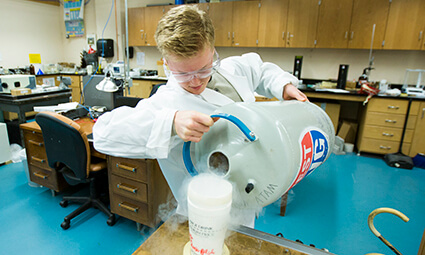 The question isn’t as simple as it used to be. Banks graduated from Bremen High School in spring of 2017, but he already has the credit hours of a traditional sophomore.

Having benefited from the dual-enrollment program at the University of West Georgia, Banks arrived his first year at the College of Science and Mathematics with college credits under his belt. His major may be undeclared, but his science objectives are clear.

“I plan to pursue a degree in aeronautical engineering,” Banks said, as his computer screen splashed with data from his experiments.

Surrounded in a lab by equipment that ranges from a 3-D printer to a 10,000-pound press, Banks works closely with his mentor, Professor of Physics Dr. Benjamin de Mayo.

Funded in part by a NASA grant through the Georgia Space Grant Consortium, the subject of Banks' recent experiments is a fine, charcoal powder, which is in fact a sample of diamond nanoparticles. The experiments measure the electrical resistance of these nanoparticles under varying conditions of temperature, humidity and – in later experiments – pressure across short, but carefully measured, intervals of time.

“We put the nanoparticles inside structures we 3-D printed, and we hook them up to sensors,” Banks explained. “It’s not just diamond nanoparticles. We test zirconium dioxide, boron nitride, titanium oxide and other oxides.”

The data points are collected and transferred to spreadsheets through which Banks plots and analyzes the outcomes to find changes, however slight, in electrical resistance across the defined variables.

“Nobody else is doing this kind of stuff, so it’s all brand new,” de Mayo said.

While the professor enjoys the value of discovery in its own right, there are real-world applications that may depend on the results of these ongoing experiments.

“Because diamonds don’t interact with the body, diamond nanoparticles have an increasing amount of use in various bio-applications, such as cancer treatment,” de Mayo said.

Understanding how diamond and other nanoparticles react under various conditions could, therefore, prove highly valuable in health care, as well as other disciplines. 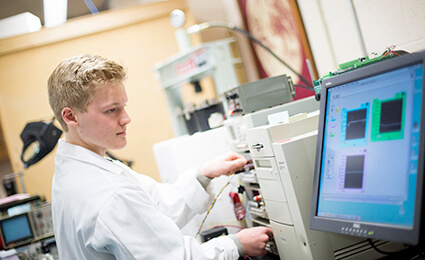 Meanwhile, Banks enjoys his five to six weekly hours with his mentor and working in a functioning lab in real experiments with as yet unknown outcomes. He fully understands the value of an early start through dual enrollment at UWG. He also sees the benefit of hands-on, experiential learning in a lab during his first year of college.

For Banks, UWG was the only clear choice.

“I wanted to come here, do my core and get some experience,” Banks said. “It was definitely a good choice coming here, especially with the opportunities of undergraduate research that aren’t necessarily afforded anywhere else.”