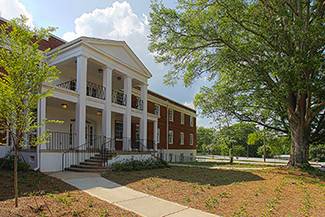 The historic Newnan Hospital is the center of the city of Newnan. Considered an asset in the community for its significant historical characteristics, the University of West Georgia also considers it a treasure. As the home for the nursing program at UWG Newnan, the historic hospital is projected to increase enrollment to 750 students and may bring enrollment up to 1,200 students in the future. The reason for this increase: redevelopment. The old Newnan Hospital/UWG Newnan has completed its redevelopment and is proudly receiving recognition for its newly renovated campus.

“UWG Newnan is honored to have received the 2016 Preservation Award for Excellence in Rehabilitation from the Georgia Trust for Historic Preservation,” said Brendan Bowen, assistant vice president of Campus Planning and Facilities. “Many thanks to the UWG team, the city of Newnan, the Board of Regents, Houser Walker Architects, and our many other partners for making this project a great success.”

UWG Newnan serves as a branch location for the growing nursing program and a variety of courses. When the hospital relocated to a state-of-the-art facility in 2012, the city of Newnan, the Newnan Hospital Board, and the Board of Regents partnered to redevelop what is now UWG Newnan.

“It’s unique to find numerous local governments and private individuals and the University System of Georgia to come together for what they believe is an opportunity to make a long term improvement in a growing community,” said Hasco W. Craver IV, business development director for the city of Newnan.

Repairs, alterations, and additions to the hospital began in May 2013. Many of the hospital’s historic buildings and structures—such as the Nurse’s Dormitory, the terrazzo stair, hospital porch and the former surgery suite—were renovated.

“The opportunity for the Newnan campus came about and elected officials decided that it was a project worthy of the investment as a local economic driver,” continued Hasco.

Hired to rehab the old Newnan Hospital was Houser Walker Architecture. The company nominated the Newnan Hospital Redevelopment and the University of West Georgia Newnan last year for the trust’s rehabilitation award.

Georgia Trust’s mission is to preserve and revitalize Georgia's diverse historic resources and advocate their appreciation, protection, and use. Only projects making compatible use of a building through repairs, alterations, or additions while keeping its historical value can be recognized. Projects must also be completed within the past three years, and be listed or eligible for listing in the National Register of Historic Places.

UWG Newnan is one of 14 projects awarded the Preservation Award for Excellence in Rehabilitation from the trust this year.