Two years ago, Dell Technologies released a report that sent shockwaves through educational institutions around the globe.

The University of West Georgia’s Dr. Jeannie Pridmore – and the curriculum she teaches as an associate professor in the Richards College of Business – are still feeling the effects of that report, which asserted that 85 percent of the jobs that will exist by the year 2030 haven’t been invented yet.

How can Pridmore and her colleagues in the Management Information Systems (MIS) program prepare their students for jobs that haven’t even been envisioned yet? They’re starting now.

Over the summer, Pridmore taught a course to 40 undergraduate students titled “Networking Research and Certification,” in which students learned robotics programming, networking, and how they can “plug in” to the internet of things (IOT).

“I wanted to look to the future and try to figure out what could help position our students to take advantage of where the networking field is going, and that led me to IOT,” said Pridmore, whose background is in engineering. “There are about 35 million items attached to the internet right now – from smartphones to traffic cameras to refrigerators. In five to 10 years, that number is expected to rise to about 50 billion – with a ‘b’ – items attached to the internet.”

Companies are trying to figure out how to implement these new technologies in a way that will help them strategically run their operations – from their supply chain to cybersecurity. That’s where UWG graduates who took Pridmore’s course will come in.

“For these students, who are planning to graduate in a year or two, even by that time, the amount of jobs in IOT is going to have skyrocketed from what we’re seeing now,” she said. “There’s doesn’t seem to be a stop in the growth market for IOT, either. So they need to know this stuff.” 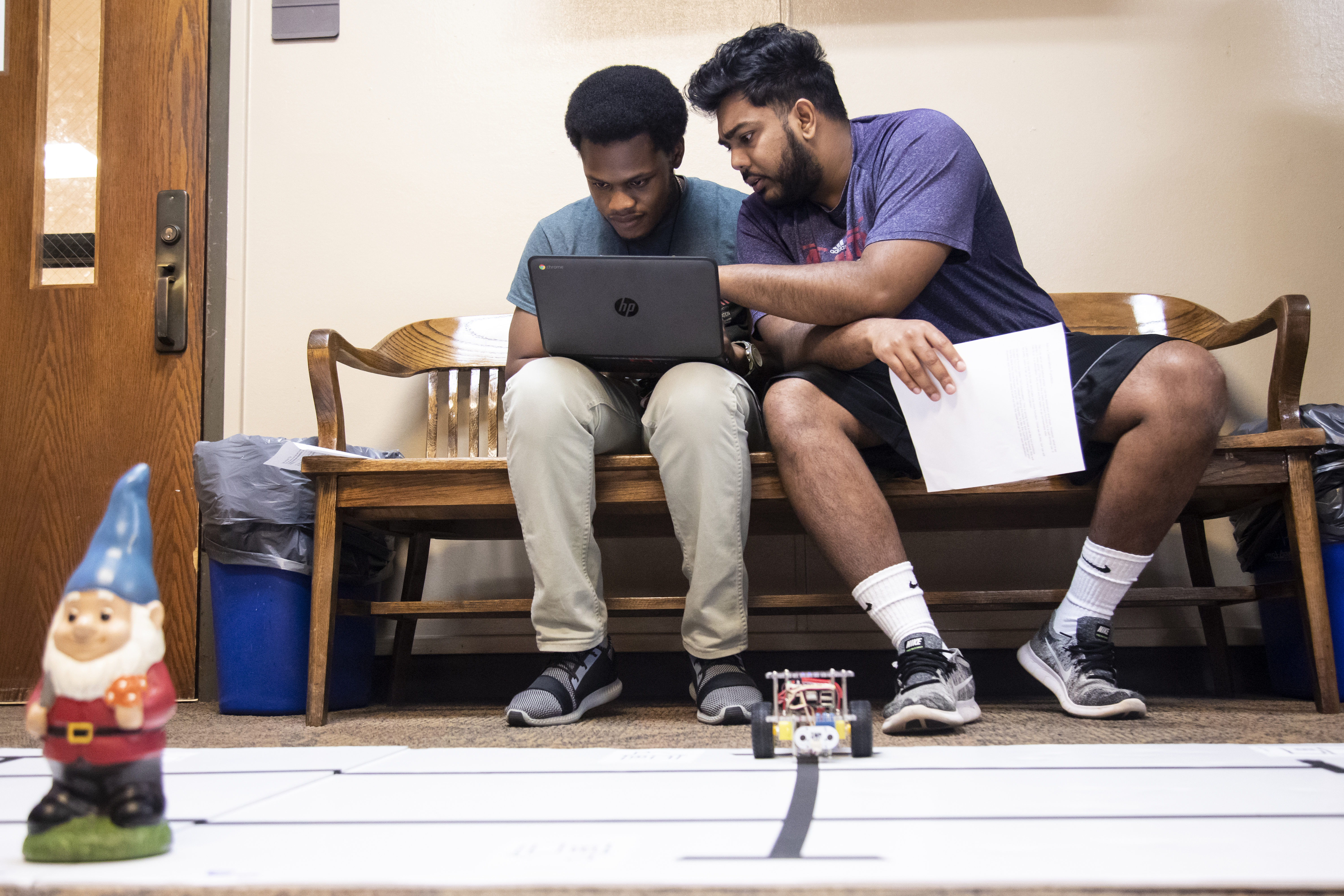 The robots were powered by a series of small single-board computers. 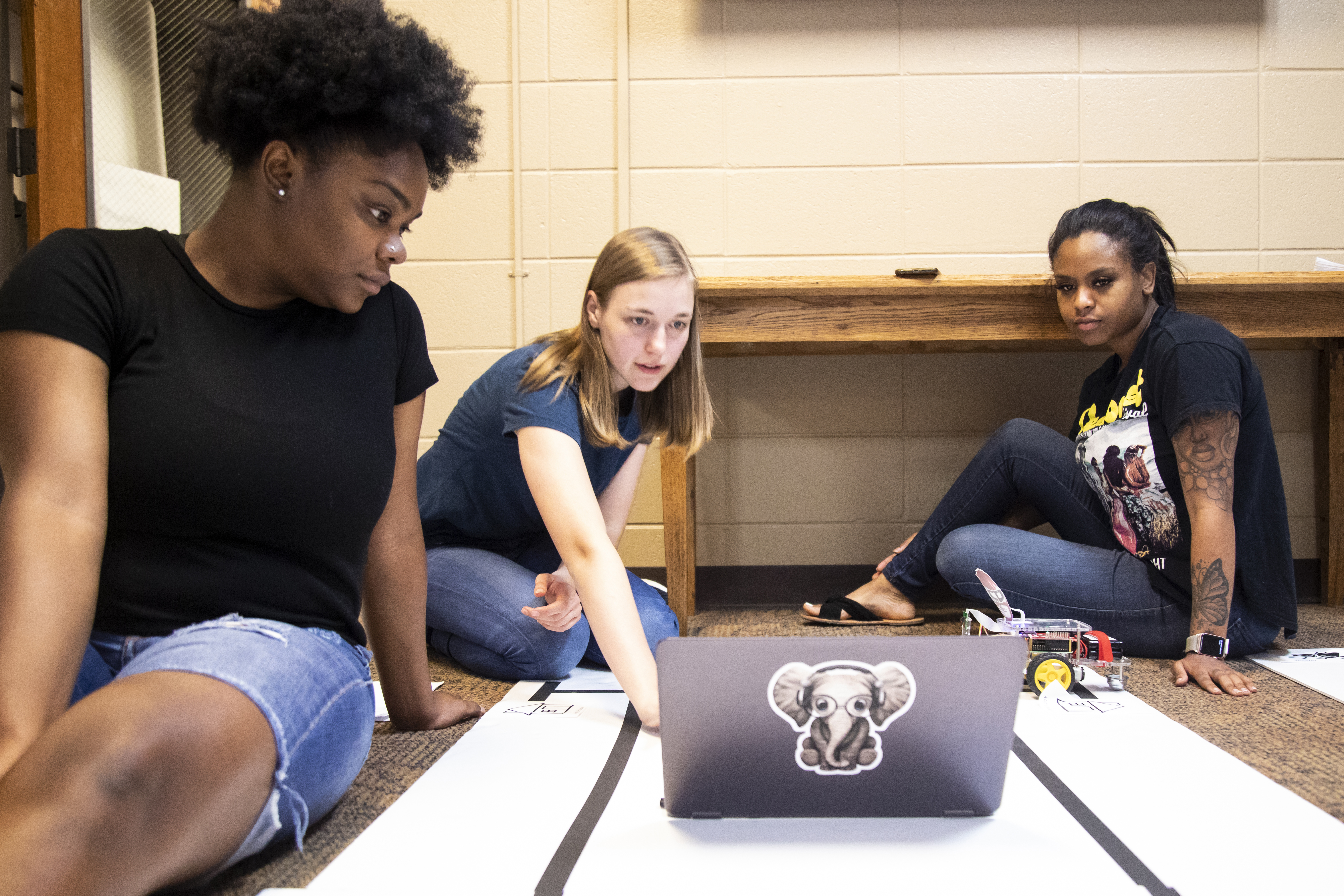 Students connected the robots wirelessly and programmed them to perform tasks.

Working in groups, the 40 students were granted access to 10 robots made by Dexter Industries. Students were instructed to connect to them wirelessly and program them to perform tasks in which the robots wheeled around a track on the floor. Move forward for 10 seconds, take a hard right turn, move forward for 20 seconds, stop.

The robots were powered by Raspberry Pi, a series of small single-board computers developed to promote teaching of basic computer science in schools and in developing countries. They were outfitted with several sensors that allowed Pridmore to simulate the abilities of self-driving cars.

For many of the students, it was their first encounter with programming robots. It won’t be their last, though.

Edward Burdick, a senior majoring in MIS, is one of those first-timers. He enjoyed working with robots and seeing firsthand how advanced technology has become, allowing students like him to learn techniques that would have been impossible a decade ago.

“Jobs in these fields keep growing because there aren’t enough people to fill those positions,” Burdick said. “So I feel like the skills I learned in this class will definitely help me land a good job in the future.”

Fellow student Terran North, a double-major in management and MIS, said she’d like to work in human resource information systems after graduation. To work in that field, she’ll need the technical background. Hence, her MIS major.

“It’s been so interesting to get to learn how to program and making sure the information we’re sending to the devices matches what’s on our computers,” North said. “It’s a lot of detailed work, but it’s cool work seeing how much companies have to do to make sure their systems stay secure.”

As for the class’ future, Pridmore said she hopes to grow the class both in the number of students enrolled and the offerings in the curriculum.

“The activities we’ve engaged in are extremely hands-on,” Pridmore said. “I don’t think I could get any more engaging than what we’ve done with this because they’ve actually put to practice the theory they’ve learned about IOT. It’s experiential engagement, and I hope it’s opened their eyes to see what the future is going to hold – and what their place in it could be.”

Photography and videography by Julia Mothersole