The University of West Georgia has been producing excellent nurses for the last 40 years. Many of those nurses were welcomed back to campus recently when the Tanner Health System School of Nursing held a reunion celebrating the 40th anniversary of the Class of 1976. 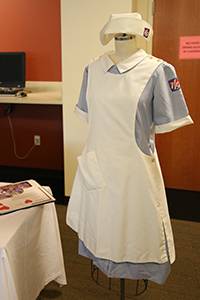 The reunion, which included a reception, displays of earlier nursing memorabilia, and a simulation lab demonstration, was attended by Dr. Jeanette Bernhardt, past chair of the nursing department. During her time as chair from 1978 until 1999, she saw many changes and accomplishments.

Among those was the BSN completion program for registered nurses in 1987. The program was nationally accredited by what is now known as the National League for Nursing Accreditation Commission in 1978 and maintained full national approval until 2000, when it was accredited by the American Association of Colleges of Nursing accrediting body.

In addition, the nursing program moved to a new facility in the Education Annex in 1994 and experienced exponential enrollment growth in 1999.

“I was, and continue to be, honored to be a part of a group of faculty and students who pursued the highest level of excellence in academic and clinical competence, as well as maintaining a focus on caring as the essence of nursing,” Dr. Bernhardt said. “Faculty established high standards for both academic and clinical excellence and assisted and supported students in meeting these standards. The work of faculty, students, and certainly our graduates has made a significant difference in health and nursing care in this community, in the state, and internationally.”

Another previous department chair, Dr, Kathryn Grams, attended the reunion. Dr. Grams was chair from 2000 until 2008. In 2008, she had the distinction of being named the founding dean of the newly established School of Nursing, where she served until 2014.

Dr. Grams also provided leadership for the design and construction of the 64,000 square foot building that now houses the THSSON.

“I believe that the undergraduate and graduate nursing programs at UWG are of the highest quality,” Dr. Grams said. “These programs are centered in caring and innovation and graduate nurses who are prepared to transform health care delivery and nursing education for the future.”

Jackie Esslinger, a member of the first graduating class of nurses in 1976 attended a private reception the night before the reunion. Due to health reasons, Jackie was unable to attend the reunion, but she has previously toured the THSSON building.

Jackie’s grandson, Rick Thomas, is following in her footsteps. He is a member of the most recent graduating class of nurses, receiving his degree with the Class of 2016 in commencement ceremonies held on April 30.

“It was great to see some of my classmates from so many years ago,” Jackie said. “I believe we had 25 members in the very first graduating class of the West Georgia College School of Nursing and a classroom in the Martha Munro building. It is very exciting to see what the program has grown into and the beautiful new Tanner Health System School of Nursing.”