Wooden Bowl to Be Displayed During Richards Hall Ribbon-Cutting Oct. 22

Wooden Bowl to Be Displayed During Richards Hall Ribbon-Cutting Oct. 22Share this pageShare on FacebookShare on TwitterShare on Linkedin

Logs marked with green spray paint reading “WG” rest outside an unassuming lumber processing plant in Villa Rica, Georgia. They had traveled from the University of West Georgia campus in nearby Carrollton, but their journey had only begun.

Two years later, they now adorn Roy Richards Sr. Hall, a new beacon of learning, optimism and promise on UWG’s campus. One lucky log even became a piece of art turned by a renowned woodturner and UWG alumnus.

Where once the trees had fallen, they’ve risen again.

Strips of poplar peel away from a stump of wood, too soft to withstand the auger’s force. In his basement studio in Marietta, Georgia, Philip Moulthrop ’69 is in his element.

Several trees were felled near UWG’s main entrance in 2019 to make way for the construction of Richards Hall, but they have been repurposed into a variety of items, including beams, countertops and tables.

One such tree was a tulip poplar that Moulthrop marked (with green spray paint) as the perfect candidate for his work, which involves turning stumps and logs that would normally be discarded into beautiful pieces of art.

Moulthrop’s final product, a project initially begun in August 2019, will grace the halls of Richards Hall for decades to come. The large, oval bowl is so elegantly shined to perfection, it acts as a kind of wooden mirror.

The bowl will be on display during Richards Hall’s grand opening later this month, when UWG will officially cut the ribbon on the new building on Friday, Oct. 22, at 4 p.m. Richards College of Business Dean, Dr. Christopher Johnson, said the bowl represents a confluence of past, present and future for the college.

“As we dedicate ourselves to the curation of a first-choice university, showcasing items like this help us create a distinctive place for our students, faculty, staff and alumni,” said Johnson, who began as the college’s dean in July. “The piece is beautiful, of course, but knowing the history behind it – that a UWG alumnus crafted it from wood that was taken from right outside Richards Hall’s doors – bring new levels of meaning to such a worthy endeavor. We are proud to have it as a centerpiece in our new home.”

The trees for use inside Richards Hall were processed by Eutree Inc. in Villa Rica. Founder Sims Acuff described Eutree as a “boutique lumber mill” with a goal to revolutionize the way flooring and other hardwood products are sourced, processed and supplied.

“Instead of throwing them away, we are able to make the best use of the resources we have, so it’s a more sustainable way to get wood products,” Acuff said. “Pieces like what we’re processing for UWG, especially Mr. Moulthrop’s bowl, are a key piece of our mission to be where ‘responsible’ meets ‘beautiful.’”

Philip is the second in a trio of Moulthrops who have taken up the woodturning craft. His father, Ed, is also known as the father of modern woodturning, and his son, Matt, turned his first bowl at the age of 7. Philip learned the craft at his father’s hand in 1979.

“That was a good time to start because even though woodturning has been around for thousands of years, artistic woodturning was still a new area at the time,” Moulthrop said. “The public was fascinated by it, and I’ve been able to hone the skill over the past 40 years with the same primary goal in mind: maintain the wood’s natural appearance.”

Moulthrop graduated from then-West Georgia College in 1969, majoring in biology and minoring in chemistry. After several years in a chemistry lab, a corporate setting and even passing the bar exam to become an attorney, Moulthrop became a full-time artist and craftsman.

“I have some incredible memories from my time at UWG, and it’s so rewarding to know that something I’ve made will be seen and experienced by students for years to come,” he said.

To learn more, visit these links:

photography and videography by Miranda Daniel 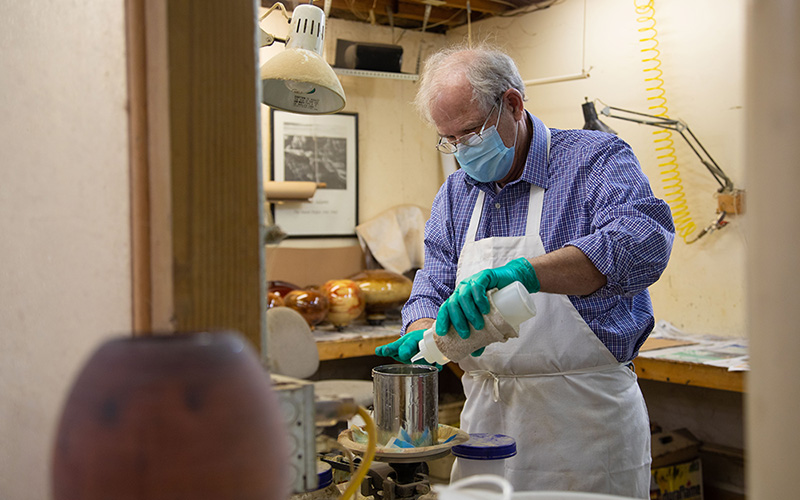 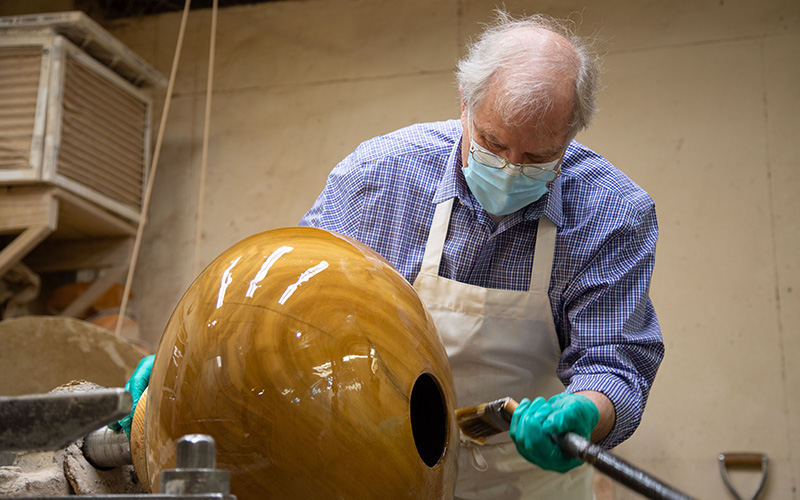 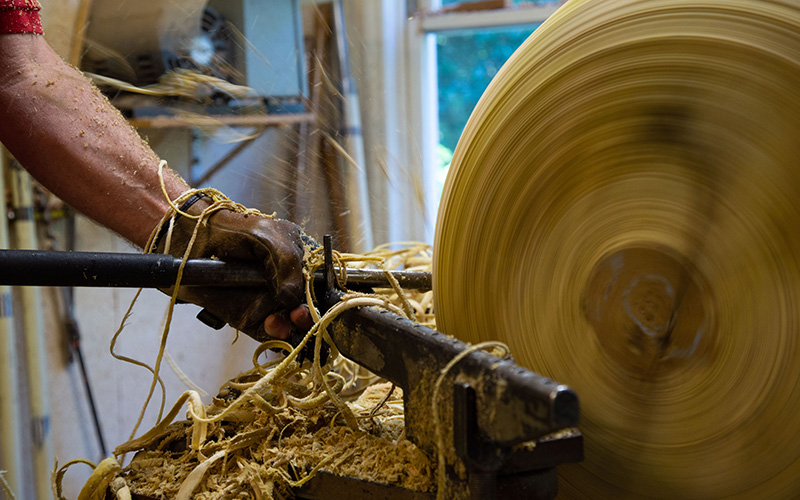 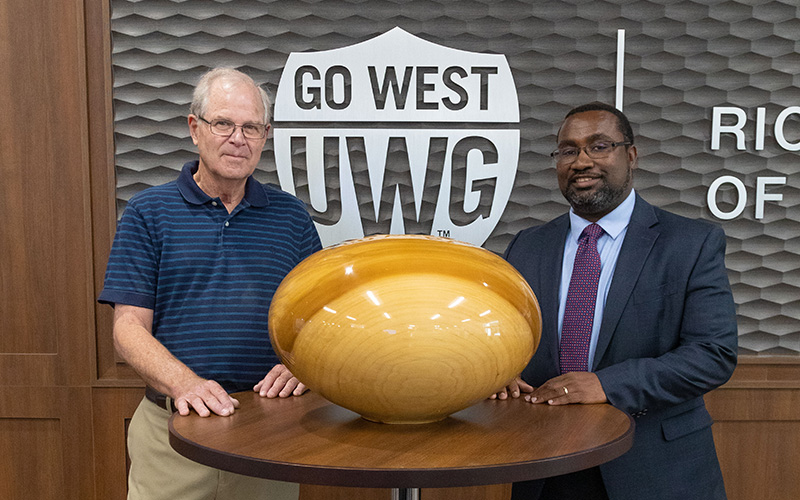 Moulthrop and Johnson with the finished bowl. 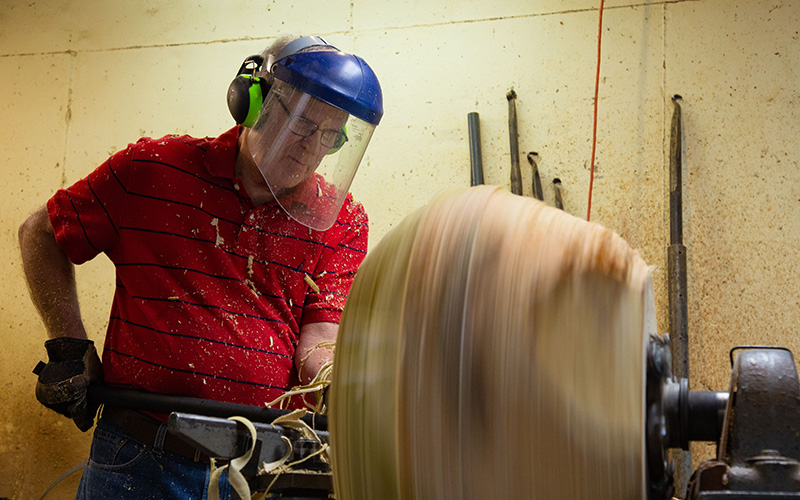 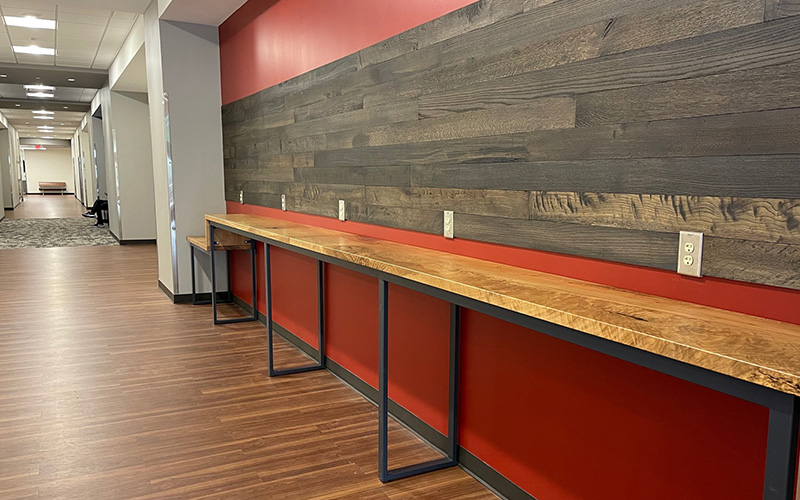 Some trees were repurposed in other ways, such as these countertops ... 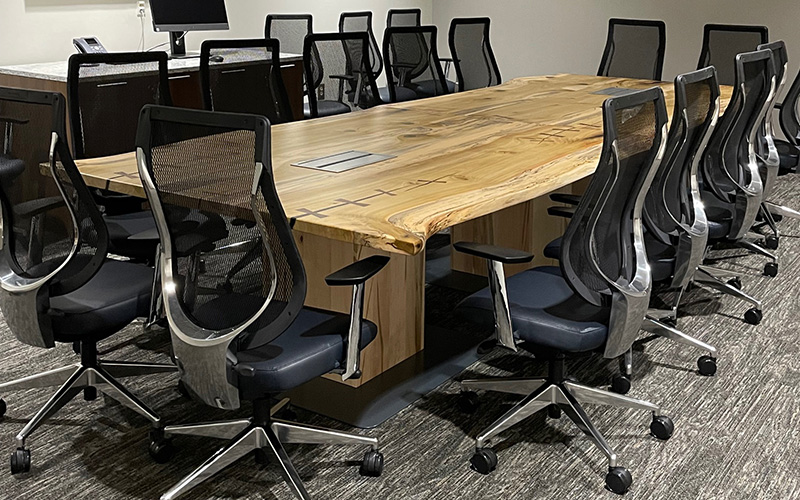 ... and this conference table.