Aiming Even Higher: Former Armed Forces Member Makes UWG His Next Tour of Duty Share this pageShare on FacebookShare on TwitterShare on Linkedin

It’s never too late to Go West. At the University of West Georgia, adults who are ready to further their education will find all the resources they need to be successful. 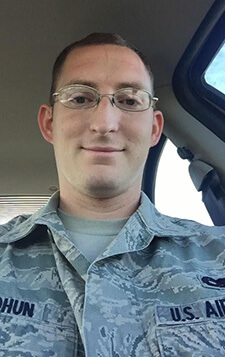 Through UWG’s Center for Adult Learners and Veterans (CALV), nontraditional students like 25-year-old Matthew Vohun are soaring to greater heights. After high school, Vohun proudly served in the armed forces. Upon completing his duty – which included three deployments – he decided it was time to pursue a new dream: getting a degree.

“Straight out of high school, I joined the U.S. Air Force and served for six years,” Vohun said. “When I was discharged, I decided I needed to earn an education while I was still young.”

A native of Carroll County, Vohun was familiar with UWG’s reputation for excellence.

“I wanted to be close to my family, and I already knew UWG, so it was the best choice,” he said.

Once enrolled at the university, Vohun turned his focus on what he wanted his major area of study to be.

“I heard from a lot of my friends who had attended UWG that the Richards College of Business was thought of very highly,” he said. “I wanted to major in a field that would offer me viable opportunities financially, so I did some research about the college and the programs and relationships they have with Southwire and other companies locally and in Atlanta. That’s what really drew me in.”

Vohun has been pleased with his decision and said the Richards College of Business is preparing him for a real-world career. A marketing major, he is also working toward a certificate in advertising. During his educational journey, Vohun said his professors have been outstanding.

“The professors are top-notch,” Vohun said. “They are very knowledgeable, and they are also really good people. I haven’t met a professor yet who wouldn’t work with you if you had something going on in your life.”

“I am a big believer in the difference that small class sizes can make,” Vohun said. “Some of my classes only have 15 or 16 students, which means my professors and I have a chance to know each other better.”

“It’s very beneficial,” Vohun said. “I have been told by a couple of students that the life experiences we share with them have helped their perspective. We learn a lot from them as well.”

For both traditional students and adults considering a return to higher education, Vohun has some advice.

“You never stop learning, whether you believe it or not,” Vohun said. “Furthering your education is a never-ending quest, and it’s totally worth it. Coming out of the military, I thought I was pretty smart, but I knew there was always more to learn. It’s been such an awesome experience.”