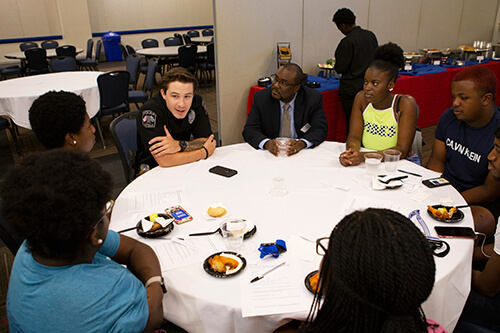 The event, co-hosted by UWG’s Center for Diversity and Inclusion (CDI) and UWG Police Department (UPD), provided students and local law enforcement the chance to connect through open dialogue. Representatives from the Carrollton Police Department and Carroll County Sheriff’s Office also joined in the conversation.

Dr. Stacy Boyd, UWG’s interim chief diversity officer, said the purpose of the event has always been to “humanize the badge.”

“Oftentimes, when we engage each other, we don’t engage with each other on a human level – instead, choosing to engage in stereotypes we have about one another,” Boyd said. “This event is great because it opens up those conversations so people can put a face and a person behind the roles people play on campus.”

UPD’s interim chief, Dr. Ned Watson, said he hopes students established a rapport with officers both on campus and off during the event in a safe, engaging environment.

“We like to offer a way for law enforcement in the area and students to intermingle on a human basis,” said Watson. “I want students to see police officers as human beings – not just blue lights behind their car. We’re here to protect them, and we’re here to keep them safe. That’s the bottom line.”

The event consisted of roundtable talks in which an officer sat with a table of students and answered any questions they had. After about 15 minutes, the officer would move to another table to talk with a different set of students. The rotation of officers gave the students a chance to converse with officers from different agencies. 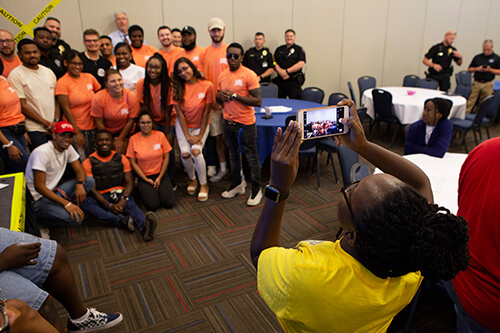 The event concludes with remarks from several individuals, including Boyd, Watson, UWG’s interim dean of students, AnneMarie Reed, and representatives from other local law enforcement agencies.

Boyd said the Blue Mocktail events are crucial in building bridges between students and police.

“My hope for the event is always that we actually, honestly engage with each other and that we do not operate from a space of fear, but rather one of openness and honesty to bridge those gaps,” Boyd said.