It was a banner day for University of West Georgia Cheerleading at Disney's Wide World of Sports in Orlando, Fla. on Saturday, as the West Georgia Wolves took home the hardware in both All-Girl and Coed competition, marking the first year that the Wolves have swept their team competition entries under head coach Nicole Nichols. 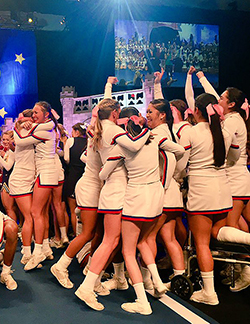 The program has been a dynasty since 2001, when former coach Sherry Cooney took what was a broken program just a few years after a tragic accident and began the run that has now reached 21 championships at UCA Nationals. Nichols took over the program in 2011 and never broke stride, leading the Wolves to now seven titles at UCA Nationals. The All-Girl Squad won two-straight in her first two trips at the helm of UWG Cheer, and this year was the fourth-straight title for the Coed squad.

First up was the All-Girl squad, which won their first championship at UCA Nationals since the 2013 season. That was the first year that the Wolves competed in All-Girl Division I, as West Georgia edged out powers like Morehead State and the University of Delaware in this year's competition. The Wolves now have been crowned champions eight times on the stage in Orlando.

In the evening session, it was time for the 12-time champion Coed Squad to take the stage. The Wolves came into this year's competition as a favorite to win their fourth straight title, and the 2017 version of the UWG Coed squad did not disappoint, nailing their routine to take the Open Coed Division over Division II powers like Pittsburg State and Northwest Missouri State.

On Friday, two different UWG Partner stunt teams took the stage, with the team of Mike McAbee and Taylor Jordan taking fifth place in the competition. Also competing for the Wolves were sophomores Spencer Collier and Brittney Castona.