Aimee Copeland believes you can have faith or you can have fear. It’s a lesson taught to her by her father, and it’s a message that she shared with University of West Georgia graduates on July 25 at the summer commencement ceremony. 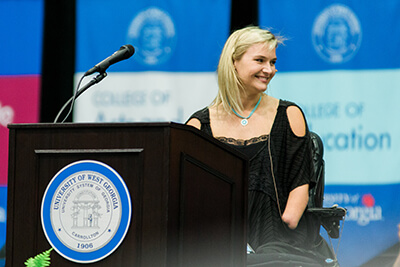 Copeland is no stranger to faith and fear. She was a graduate student at UWG in 2012 when she fell from a homemade zip line and contracted necrotizing fasciitis, a deadly disease that claimed both arms below the elbow, her right leg below the knee and her left leg almost to her hip.

The night she was life flighted to Augusta, doctors didn’t expect her to live and told her family to pray. That same evening, the psychology department at UWG held a candlelight prayer vigil in her honor. Little did they know that at the hospital, her lactic acid levels had risen to 10 times the survivable level.

Astonishing, mind-boggling and unbelievable were all words that Copeland’s doctors used to describe her ability to survive.

“I truly believe it’s having faith that allows me to persevere despite all the odds,” she shared. “It’s our belief in what can be and what we can do in our lives that allows us to continue to be determined no matter the obstacles we face. It is that belief that allows me to act courageously.”

After graduating from UWG with a master’s in psychology, Copeland enrolled in a web hybrid program at Valdosta State University. She would drive down one weekend out of every month and stay at a hotel. The first time she did this, she was feeling especially courageous and decided to take a shower. The shower bench provided to her by the hotel was too small, and she slipped off and got her arm tangled in the grab bar.

While she recognized she had that moment to express her pain, in the end she had to take action. She finished her shower on the floor.

“You can’t control what happens to you in life, but you can control how you respond,” Copeland advised. “You can control lifting yourself up and trying no matter what. When you truly believe in your dreams I think you can do anything. I think when we have faith, we will be surprised.” 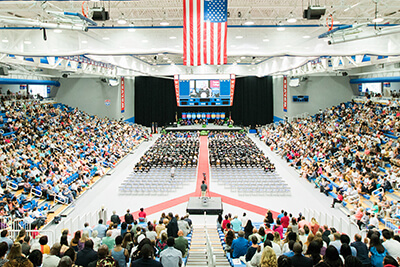 Another anecdote she shared occurred around the time her wheelchair accessible van was stolen while she was making homemade, old-fashioned chicken potpie. She said she didn’t miss a beat in the preparation of her meal—the way she saw it, she had already lost more than a car, and she survived it.

“Freaking out would just ruin the chicken potpie too,” she mused to laughs. “So often in life we let our trials and tribulations affect this moment that we can live to the fullest.”

Copeland, who is now a licensed social worker and works as a psychotherapist at the Heartwork Counseling Center in Atlanta, said she has discovered firsthand the power of hope and belief.

“Just as my dreams require belief and determination, so do yours,” she said to the grads. “So nourish your dreams with hope and perseverance.”