The University of West Georgia is pleased to announce the appointment of Russell Crutchfield as government and external relations, special assistant to the president. As UWG’s chief liaison to local, state, and federal government officials, he is responsible for promoting and supporting university initiatives and programs and strengthening relationships with key policymakers while serving as an advocate for the university to advance the priorities of the president, the institution, and the University System of Georgia as a whole. 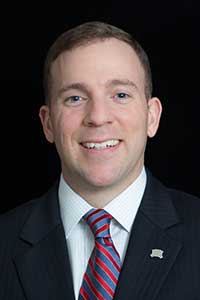 “Russell Crutchfield is exactly the kind of seasoned professional we need to represent our institution in the halls of government,” said UWG President Kyle Marrero. “He practically grew up at the capitol serving as a legislative aide while working on his master’s degree at UWG and moving on to governmental liaison posts for three major state agencies over the last 10 years. His contacts in government have been built over a fast-track career of ever increasing responsibility, and we are excited to have him on our team.”

Russell said he feels blessed to once again be a part of the university.

“In my role at UWG, I am very fortunate to be able to tell the story of how the university became the institution of excellence that is it today and how we collectively, as a university family of students, staff, faculty, alumni, and community, are working together to strive for greater excellence,” he said. “There is a great story to be told here, and I believe the best chapters have yet to be written for our university. Together we will build upon the successes of the past to mold a strong future.”

Russell brings a wealth of state government experience. He comes to UWG from the Georgia Department of Public Health (DPH) where he began his tenure as the department’s first government relations director, managing the department’s legislative, congressional, intergovernmental and constituent services endeavors. He went on to serve on the executive leadership team and held the positions of director of strategic priorities, deputy chief of staff, and was a principle policy advisor to the commissioner and state health officer. Russell’s accomplishments at DPH include the establishment and management of the department’s informatics, healthy aging, and telehealth programs, as well as the management, evaluation, and transformation of the Office of Vital Records, and evaluation and transformation of the Maternal and Child Health program.

Prior to his tenure at DPH, Russell served as the Georgia Department of Labor’s chief of staff where he was responsible for government relations and assisted in managing the day-to-day activities of the department for the state labor commissioner.

Russell began his career in state government at the Georgia Department of Community Health (DCH) where he served as legislative liaison to the general assembly before becoming DCH’s director of legislative and external affairs, the chief liaison responsible for promoting the department’s initiatives and legislative goals with the Georgia legislature, congressional delegation, federal and state agencies, and external interest/advocacy groups. Russell also managed the department’s constituent services team while overseeing external relations for DCH programs that include the Medicaid and PeachCare for Kids© programs, state employee insurance plan, healthcare facilities licensure and regulation, and the Division of Public Health.

In previous legislative sessions, Russell served as an aide in the Georgia Senate and House of Representatives.

Russell received a bachelor’s degree in political science in 2004 and a Master of Public Administration degree in 2007 from UWG. As an undergraduate and graduate student, he witnessed firsthand how the university continually strives for excellence.

“What makes UWG truly great are the rewards of a university-wide emphasis on student success and academic achievement; fostering and maintaining a workplace culture that attracts, retains, and motivates; and commitment to the community,” he concluded. “These pillars have become the foundation of what will continue to make UWG one of the finest academic institutions in the state, on its way to becoming the best comprehensive university in the nation.”