The University of West Georgia solidified its place as a national football powerhouse Wednesday with the naming of David Dean as its head coach.

In the announcement, made by UWG Athletic Director Daryl Dickey, Dean became the 12th head coach in the school's history. 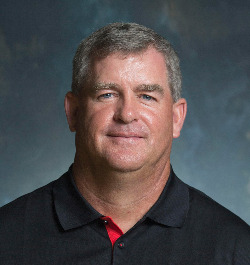 “We’ve worked hard to build a championship culture at West Georgia, and we are grateful to all who have been associated with this process for their hard work, devotion and dedication,” Dickey said. “We feel Coach Dean is the person best-suited to continue our football program's mission of championship performance.”

UWG will welcome Dean tomorrow - Thursday, Jan. 26 - at with a meet-and-greet event at 4 p.m. at the UWG Coliseum. The event is open to faculty, staff, students, media and fans.

After trips to the playoffs in both 2008 and 2010, Dean once again led his squad to the top of the Division II football world in 2012, capping a 12-2 season with a 35-7 rout of previously unbeaten Winston-Salem State. Following a 2-2 start, Dean’s squad reeled off 10 straight victories, allowing him to join another elite coaching fraternal order as the 10th head coach in NCAA Division II history to win multiple championships during his career.

“I’m really excited about the opportunity to come back to Carrollton and to get back into the Gulf South Conference. I'm also looking forward to working again with many people that I’ve kept in touch with over the years," Dean said Wednesday. "We’re going to do everything we can to bring a national championship back to Carrollton. This is a nationally prominent team that no one can ignore. We’re going to put the pieces of the puzzle together and build on the strengths that are already there.”

Dean was named twice the American Football Coaches Association Division II Coach of the Year, having accomplished the feat in both 2007 and 2012. Additionally, he received recognition as the AFCA Super Region II Coach of the Year honor in 2010. The individual accolades have not been reserved just for Dean during his tenure, as he had a player receive All-America recognition on 27 occasions as a head coach, including six in his final season at Valdosta State. Under his direction, a VSU player was named All-Gulf South Conference 66 times under his watch.

“We are committed to producing champions on the field and off the field,” said UWG President Kyle Marrero. “Thanks to the efforts of Coach Will Hall, his staff and all those that have elevated our football program to national prominence, this was a highly sought after position.”

“As we enter a new era, we will continue to contend for championships, support our student athletes and engage our communities,” Marrero added. “We are thrilled to have David Dean join our team and help us advance our path. Go Wolves!”

In nine years as a head coach, Dean has an overall record of 79-27, with a 42-19 record against Gulf South Conference opponents. His teams went to the playoffs in six of those nine years, advancing beyond the first round in five of his six appearances.

As an assistant coach, Dean spent eight years on the staff at West Georgia from 1992-1999, helping lead the team to the NCAA Division II playoffs three times. He went on to lead as offensive coordinator at Valdosta State from 2000-2007. In those eight years, he was a part of a staff that went to the Division II playoffs six times, including a national runner-up season in 2002 and a national championship in 2004.

“I wish to thank all of those who have shown interest in our position as well as all of those who supported us through this transition,” Dickey said. “This decision was extremely difficult, competitive, broad and diverse. The applicant pool was outstanding, as was our candidate pool during the interview process.”