Dine West, the University of West Georgia's internal food service program, contributed $16.6 million to the local economy in its first year, more than double the university's impact for the previous year with a private vendor. 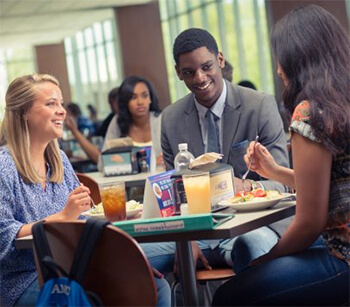 The local impact for fiscal year 2017—July 1, 2016 to June 30, 2017—includes money spent on food and labor as well as the added jobs and expenditures of local suppliers, according to a university report.

“As we seek to contribute to and help drive the local economy, Dine West has been a tremendous success,” said UWG President Kyle Marrero. “First of all, our students, faculty and staff receive a higher-quality dining experience. At the same time, we're spending our dollars at home in support local businesses and suppliers and the regional economy.”

Authored by UWG's Center for Business and Economic Research (CBER), the study shows about 60 percent of UWG's expenditures were made within the west Georgia region before the move to bring dining services in-house.

“We increased from 60 percent to 77.5 percent of locally purchased goods and services,” said Dr. Joey Smith, a UWG economics professor who completed the study with CBER Director Dr. Hilde Patron. “Even if you had the same amount of activity, increasing the number of dollars spent locally increases the economic impact.”

Smith said Dine West has expanded dining options, encouraging more students to invest in meal plans. He broke down the categories of expenditures and explained how they affect the economy.

Direct spending is related solely to goods and services purchased from local vendors by Dine West. Indirect spending is money put into the local economy by service providers, such as local grocers, who supply the university.

“Income is just the dollar amount that is made from people working, and the output is a measure of both income and jobs along with any added value from the product,” Smith said.

Smith said for every dollar Dine West spends locally, another 56 cents is generated by employees and suppliers.

“You get the $1 impact for the initial purchase, but 56 cents more is generated into the economy,” he said. “As the university expands, the percentage will remain constant, but the size of the multiplier indicates that the growth of impact is going to continue to increase over time.”

“There are going to be benefits that will be seen over time supplementary to the value the transition to Dine West adds to the economy,” Smith said. “As the UWG pack grows, more dollars will be spent. The cents coming out of every additional dollar can be compounded, and a substantial increase in economic impact will be realized.”