Minutes after the Constitution was ratified in 1787, Founding Father Ben Franklin went to the nearby tavern. The joke of that time was that the women who worked there knew more about politics than anyone. One of the women asked him, “So what do we have—a monarchy or a republic?” Franklin responded with, “A republic, if you can keep it.” 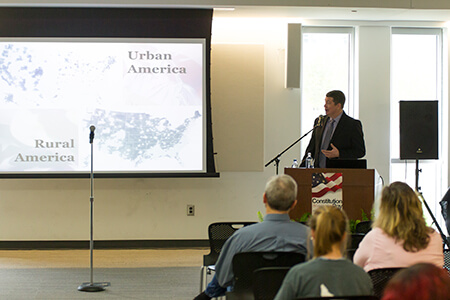 He meant that if the normal people could do what is necessary to maintain representative government, then they could keep their republic, according to Associate Professor of Political Science Dr. Greg Dixon, who spoke at the University of West Georgia’s Ingram Library on Constitution Day.

Dixon argued that the core principles of the Constitution are most relevant during trying times, and that it’s the present generation that holds the fate of the Constitution in its hands. Civic engagement is essential for our political society to flourish.

Today’s politics seem especially tense, according to Dixon. We have social media and different ways to get information. We see constant images of public disagreement. There are many photos that show fighting in the streets. In Dixon’s words, it seems to be very indicative of American politics today.

“We have these political divisions that run along urban and rural lines,” Dixon explained. “We think the division is really awful today, because it’s happening today.

“People forget that in 2001, there were protests in the streets when George W. Bush became president,” he continued. “People said he wasn’t their president because he won the minority of the popular vote.

“Times are unique today,” added Dixon. “We have smart phones and the Internet. We have social media where anyone can put up what they want to, and it’s our job to decide what is real or fake. Back then, we didn’t have to do that.”

He said the normal state of American politics is division, but the importance doesn’t lie in whether we are divided or not—it is about how we handle it. Dixon discussed that when the economy is booming and social aspects seem to be smooth, we just sit back with no political worry. When social change manifests, we become angry and demand reform.

“People say we just need consensus,” Dixon said. “There is no consensus in politics.” 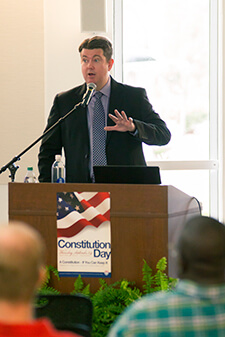 It is virtually impossible to govern a large country on the basis of consensus, and that’s what causes people to rebel. Dixon mentioned a survey that was completed in 2008 over the presidential election. The results showed that 90 percent of the country wanted the government to do something about healthcare policy, but no one could agree on the right route.

“This lead to the storm of division,” Dixon stated. “We don’t have to agree on the policy, but we do need to agree on the process. We agree that the Constitution is the law of the land, and we will follow its rules to make our decisions. Even if we don’t like the results, we accept it because in came out of a legitimate process.”

Dixon said he believes we need limitations on government power.

“Government power had to be coercive because there are people that don’t want to follow the laws,” Dixon explained. “Everyone has rights. Our government always expands its power and rights are taken bit by bit. It’s not a bad thing—it is part of the nature of our government.

“As long as our faith in the institutions survives, our policy survives,” Dixon concluded. “When you compromise, you can actually get things done. In reality, the critical element that is part of this system is civic engagement. Everyone is a critical piece in the function of the Constitution, as we are required for it to work. We are divided, but we want to be. If we all thought the exact same way, it would never work. Civic engagement is the single most important thing. You can change the future with your effort.”