There’s a new fraternity on campus and they’re ready for you, UWG. Meet the Founding Fathers of Phi Delta Theta's newest chapter. Comprised of 55 men at the University of West Georgia, together they are the Georgia Eta Colony. 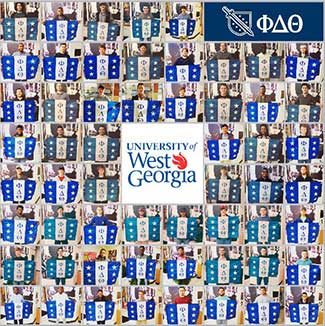 Zach Hilliard and BJ Nelson, leadership consultants, have been at the university for eight weeks recruiting members to begin their journey as Founding Fathers. On March 6, 2016 UWG welcomed Phi Delta Theta during their ceremony. Family, friends, the Greek community, along with Assistant Director of Fraternity and Sorority Life Michael Steele, Phi Delta Theta alumni, and Georgia Gamma Phis from Mercer University were in attendance to celebrate these men.

Daveon Coleman, a Founding Father, spoke about his excitement for the organization now that they have arrived.

“I’m honestly excited about doing what it takes to better Greek life for my brothers, other sororities and fraternities, as well as our community,” he said. “Phi Delta Theta wants to set the bar so high that everyone around us will strive to better themselves.”

The Georgia Eta Colony is made up of a diverse group of men, representing three different countries, with almost 15 different majors, and belonging to over 40 organizations. These differences bring them together; each person brings different experiences to the table.

Austin Handle, Colony president, made a speech during the ceremony and he left the crowd with a lasting impression.

“A common saying is to ‘shoot for the moon.’ I interpret that as ‘don’t give up on your dreams and never stop improving yourself,’” he said. “The funny thing is, we’ve already been there. Neil Armstrong (a brother of Phi Delta Theta) proved that both the character and actions of Phi Delta Theta have not only made it to the moon, we made it there first.”