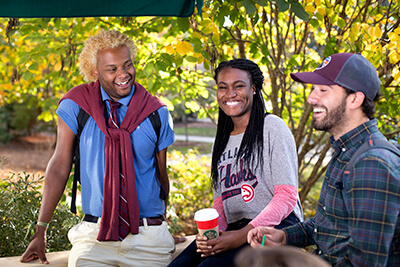 "I couldn't feel more excited and honored to be working with all of you," UWG President Dr. Kyle Marrero said when congratulating faculty and staff. "We have accomplished so much through your actions, enthusiasm and energy. Your efforts have had and will have a lasting impact for the UWG community for years to come."

UWG saw its seventh year in a row of record enrollment when 13,308 students joined the pack in the Fall of 2017, an increase of 4 percent from the previous year. The university welcomed a record-breaking 2,340 new freshmen. Those freshmen also entered with the highest average grade point average in UWG history.

"We're not only growing in the number of students who choose to Go West, but we're also welcoming more qualified students who are graduating at a record percentage," Marrero said. "We are excited to work alongside them and contributing to their future success preparing the leaders of tomorrow."

According to an annual study released by the University System of Georgia, UWG reached a $518 million regional economic impact – up $100 million in four years. During FY17, the university welcomed 33 new employees and will hire an additional 82 new faculty and staff in FY18. UWG has continued its commitment to equity and merit salary increases by investing $10.05 million recurring over the last four years.

UWG continued to make its presence and impact known by elevating positions on academic program national rankings. In FY17, U.S. News & World Report ranked five online programs among the top 100 in the nation—nursing, MBA, education, computer science and all online bachelor programs. SR Education, which ranks online college degrees, positioned three bachelor’s programs in the top 12-computer science, online criminal justice and online sociology—and the public administration graduate program as the second in the nation. Other rankings named all UWG Ed.D. degrees as third in the nation and online doctoral degrees as eighth.

Other highlights from the year show that UWG: