The Harlem Globetrotters, known for their one-of-a-kind family entertainment, will bring their 2018 World Tour to The Coliseum at the University of West Georgia on Friday, March 2, at 7 p.m. to take on their long-time adversaries, the Washington Generals. 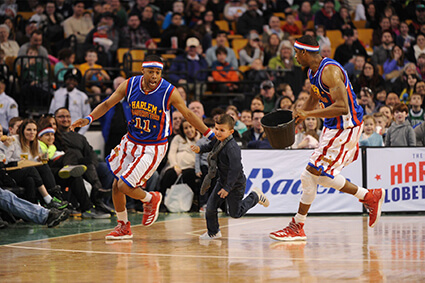 The Globetrotters will face a revamped Generals team, which recently launched a more competitive profile by making an appearance in The Basketball Tournament over the summer. The tournament-tested team is looking to snap a 47-year losing streak against its world-famous rivals during the 2018 tour.

After the game, Globetrotter stars will sign autographs and take photos with fans. The team has twice played in The Coliseum – in 2010 and 2015, both times to packed houses.

Tickets start at $24 and can be purchased at harlemglobetrotters.com, ticketweb.com or The Coliseum box office on the UWG campus.

Proud inductees of the Naismith Memorial Basketball Hall of Fame, the Globetrotters have entertained hundreds of millions of fans – among them popes, kings, queens and presidents – over nine thrilling decades. For the latest news and information about the Harlem Globetrotters, visit the Globetrotters' official website at www.harlemglobetrotters.com or follow them on Twitter @Globies.