Charles Huey loved the families who lived along his postal route. To Chuck, as he was called, these residents of Carroll County were more than just the people to whom he delivered the annual birthday cards from grandma or items bought online.

They were members of his extended family. 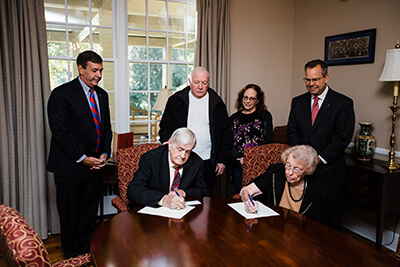 Huey loved the residents on his route so much that when his parents, Johnnie and Edna Huey, established an endowed scholarship in his memory at the University of West Georgia, they asked to include a clause that preference would be given to students who lived along their late son’s route.

“This is the greatest thing we could ever do for him,” said Johnnie, an 89-year-old man who lives with his wife, 94-year-old Edna, sitting in a Bowdon ranch home they built nearly 70 years ago. “Chuck was always a giver, and he took pride in the scholarship we’ve had established with UWG for years. We know he’d be over the moon to know there’s a scholarship with his name on it now.”

The Charles D. Huey Memorial Endowed Scholarship was recently established with a gift of $100,000 from the Hueys. Recipients must be a United States Postal Service (USPS) employee or the child or grandchild of a USPS employee. Special preference will be given to students living on Huey’s formal postal route in Carroll County.

Edna Huey, an alumna of UWG – called West Georgia College at the time of her graduations in 1944 and 1974 – said she and her husband felt led to establish the scholarship to “pay it forward” from scholarships she received when she was younger.

“If I hadn’t gotten help when I was attending school, I wouldn’t have been able to keep going to college,” said Edna, who made a living as an educator while her husband, Johnnie, worked in management in the apparel industry. “I was fortunate and blessed to receive what assistance I did when I was attending Young Harris and West Georgia College, and we felt led to pass our good fortune on to future generations. Doing so in Chuck’s memory seemed like a fitting tribute to our son.”

The Hueys said their lives would be incredibly different if UWG didn’t exist. For one thing, they wouldn’t know each other.

Johnnie was living and working in Carroll and Haralson counties in the mid-1940s when Edna – who bore her maiden name Pace at the time – came to Carrollton to complete West Georgia College’s third-year program for prospective teachers.

“I grabbed at the opportunity to spend my third year of college here,” Edna said of UWG.

The couple met because they lived on different floors in the same house that was split into apartments. During a holiday gift exchange, Johnnie drew Edna’s name, buying her a box of chocolate-covered cherries. Soon after, he asked her for a date. She accepted, and they were married in 1948, having their first son, Michael, in 1950 and their second, Chuck, in 1956.

Chuck graduated from Bowdon High School in 1974 and attended Gainesville Junior College and UWG. After working in other fields, he found his vocational home in 1995 with the USPS, where he worked until his death in June 2018. 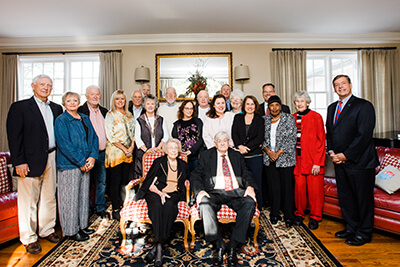 Chuck received several recognitions from USPS, including an award for “Outstanding Performance” in serving patrons in a courteous, efficient manner and being named a Distinguished Mail Person by the Society to Appreciate Mail Persons (STAMP).

Aside from handling, sorting and delivering mail during his 8-to-5 job, Chuck was also a cattle farmer, a job he shared with his father. He also enjoyed preparing his garden every year, growing fruits and vegetables he’d cook and can. Johnnie and Edna are still enjoying fruits of their son’s labor to this day, with more than 100 cans of vegetables lining their pantry.

In the intervening seven decades since they married, the Hueys have become steadfast supporters of UWG and its scholarships and causes, having been instrumental in the organization and ongoing success of Bowdon-focused events for the university’s annual giving campaign, A Day to Give West – or “A Day,” for short.

“The University of West Georgia has changed countless people’s lives for the better,” Johnnie said. “We want to help provide similar opportunities for young people who may have faced the same – or greater challenges – we faced when we were young. It’s an amazing blessing to us that we get to help change people’s lives in our son’s memory. He’d be proud.”