Laura Richards knows a journey of 18 miles begins with a single step. Starting with a vision.

As founder and chairwoman of the Friends of Carrollton GreenBelt LLC, Richards has overseen the development and construction of the 18-mile recreational, circular trail within the city of Carrollton, Ga. 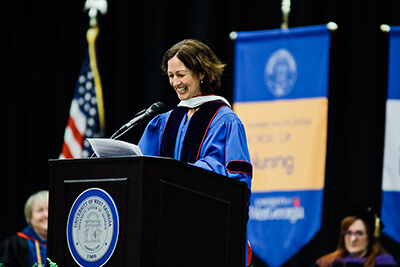 On Thursday, she received an honorary doctorate from the University of West Georgia after speaking during UWG’s spring commencement.

“The partnership I’ve shared with the University of West Georgia has gone back to the beginning of the GreenBelt in 2011, when we were determining where the trail would cut through UWG’s beautiful campus,” Richards said. “Even though the trail is complete, the work and the partnership continues, as we work with the university’s College of Social Sciences to compare the usage of our trail with similar trails across the state and nation. Being able to speak at commencement really is the culmination of our partnership.”

Richards has received numerous awards for the GreenBelt, including the 2016 Karl T. Steinen Award for Service to Anthropology from UWG’s Department of Anthropology; the 2016 Silver Award for Beautification from the Carroll County Chamber of Commerce; and the 2017 Georgia Recreation and Parks Association Volunteer of the Year award.

Before returning to her hometown of Carrollton, Richards previously worked for McMahon Publishing in New York City and for Vermont Bicycle Touring as a European guide, traveling to Holland, France, Spain and Italy to host bicycle tours.

UWG President Kyle Marrero said the honorary doctorate is one of the highest acknowledgements provided by the university.

“Laura Richards’ vision for the GreenBelt has transformed the Carrollton community,” Marrero said. “We see the effect every day on our campus and its connection with our community. Her leadership and vision have elevated the quality of life and wellness, which will leave a lasting effect on generations to come. Our awarding of an honorary doctorate to Laura is emblematic of the generational partnership with the Richards family and UWG.”

UWG began awarding the doctorate of humane letters in 1996, with 19 honorees receiving the degree. One of those honorees was Alice Huffard Richards, Laura’s mother, who received the honorary doctorate in 2002.

“Graduating from college is a lot like building a park like the GreenBelt – no one can do it alone,” Richards said. “It takes the support of family and friends. These are long journeys with lots of bumps in the road, but now we can say we’re at the end of a stage. Stopping and taking a moment to reflect and congratulate students who’ve worked so hard is such a joy for me.”

Richards’ service since 2008 on the Alice Huffard Richards Charitable Fund continues. As a member of the Carroll County Board of Health from 2015-18, Richards saw Carroll County’s ranking in Georgia improve to No. 49 from No. 58 out of 159 Georgia counties based on the Robert Wood Johnson Foundation’s County Health Rankings.