When Carita Wallgren-Lindholm signed up to study abroad in the United States, she knew she was going to experience life in a different country. She knew she would be in a strange place where she didn't know anyone and that she might even experience culture shock. But what she didn't expect was to be welcomed with open arms, forge friendships that would last a lifetime, and experience true Southern hospitality. 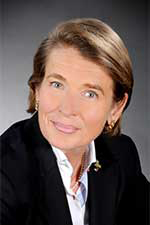 Carita came to the University of West Georgia from Finland in the 1970s with the help of the Georgia Rotary Student Program. Her father was a Rotarian, and he encouraged her to apply.

“All Finnish youngsters at that time – as now – wanted to study abroad and ‘go west,’” Carita recalled. “I had been to summer school in the United Kingdom and in France, and now there was a chance to go to the United States, which of course was the ultimate aspiration.”

So she applied, and soon she was headed for Georgia. As she expected, things were a bit different in the states.

“I was quite an alien bird on campus in the mid ‘70s and was often asked to explain things about myself and my background that I had taken for granted,” she explained. “This compelled me to learn about my own country in order to answer questions. […]Frequently asked questions regarding Finland’s war history and payment of my country’s war debt were matters of limited interest to an 18 year old girl.”

Carita had to educate herself on her own country’s current affairs, but being in a strange land didn't have much affect on her experience. In fact, everyone was extremely welcoming, though a little curious.

“I remember almost unparalleled generosity and friendliness, and unlimited positive curiosity,” she said. “Had I not chosen to remain sometimes at UWG, I would not have spent one single weekend on campus [since] I was invited to stay at the homes of almost everyone I met. […] It was the kind of hospitality extended just because it was the right and natural thing to do, for no other reason. I have in my turn tried to be a good host to the steady stream of visitors from Georgia that I and my family received in Finland upon my return.”

She enjoyed her time at UWG, but Carita said there were still some cultural differences that were hard to get used to. She was surprised to find that students were encouraged to take pride in excelling and performing well.

“The Nordic countries have been known for a tendency for individuals to avoid standing out and to belittle their achievements. In the USA individual success has always been accepted,” she said. “I thought West Georgia was particularly educating because, at the time, it was very different from the Nordic countries and a good exercise in diversity.”

This turned out to be an important lesson. As a an international arbitrator, the founding partner of Lindholm Wallgren, Attorneys Ltd., and a member of the Finnish Bar, Carita says she has found multi-cultural compassion a necessary tool in her field.

“I think the work of an international arbitrator is a lot about cultural sensitivity, the capacity to listen to argumentation from different legal traditions and cultures,” Carita said. “Living in foreign cultures helps you monitor a possible involuntary bias in favor of an argument presented in a manner aligned with your own culture.”

According to Carita, the time she spent at UWG has been a strong factor in how her professional life developed, and she learned lessons that have served her throughout her career. She even has some advice for upcoming students of law on the importance of studying abroad.

“In a general sense, it is difficult to see how any lawyer could successfully practice business law today anywhere in the world without awareness of and education in other systems of law than that of your home jurisdiction,” Carita said. “I encourage [young professionals] to forget the handbooks and the coaches and just try to develop their own essential attributes.”

She also had some advice for young women who are looking to enter her field, which is still a male-dominated profession.

“Especially, I would like to advise young women to be true to themselves and the manner in which they articulate themselves and go about their work. Female working methods and manners still, quite surprisingly, remain unknown and poorly understood by law firm management. The advantages of diversity are lost if women do not dare build on their own strengths but are convinced to adopt the working methods and articulation that is taught. I think you can never excel in your profession if you cannot be true to yourself.”