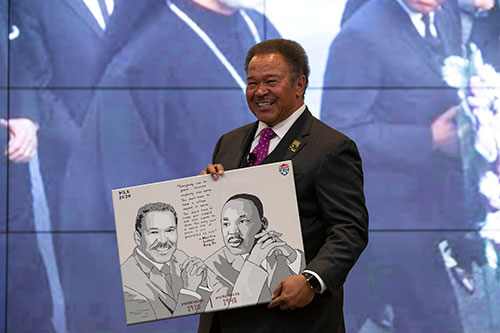 The luncheon began with an introduction from UWG’s Interim President, Dr. Stuart Rayfield.

“The University of West Georgia has a strong commitment to diversity and inclusion and it’s important for us to make sure that we broaden the way we think of diversity and inclusion,” Rayfield said. “The legacy of this institution is every single person who is sitting in this room today, and it's the ripple effect of education that creates the legacy of UWG. It’s what you learn while you're here, but it’s also what you take away and how you share your gifts and talents with the world.”

Franklin has spent numerous years as a scholar, author and educator and has an extensive career focusing on topics such as diversity, ethics and religious studies. He is president emeritus of Morehouse College and served there from 2007 to 2012.

During his presentation, Franklin touched on how the King holiday provides us with an opportunity to examine ourselves.

“The Martin Luther King season can be an annual moral checkup during which we examine ourselves in the light of Dr. King’s words and wisdom,” Franklin said. “It's a time for asking ‘How are we doing?’ and ‘Where do we need to go from here?’ ‘What new habits and practices should we embrace and advance?’”

Franklin said during this yearly exam, we should observe how we react to what King called “the triplets of social evil.”

“In a sense, Dr. King was – and is – America’s soul doctor,” he continued. “He issued a diagnosis and declared that there were three conditions that threaten to destroy us from the inside out – racial hatred, hostility and neglect of people living in poverty, and addiction to violence.”

After Franklin’s presentation, there was time for the audience to engage and direct questions to Franklin.

Deirdre Rouse from the Center of Diversity and Inclusion was joined on stage by Dr. Lara Willox and Danny Gourley, co-chairs of the Presidential Commission on Campus Inclusion, to present Franklin with a painting on behalf of UWG. Raven Brown, a local artist, created the painting, which depicts King and Franklin together and features Franklin’s favorite King quote in the center of the canvas.

Dr. Emily McKendry-Smith from UWG’s Interfaith Council offered the final remarks for the luncheon and provided more information about the purpose of the council.

“The Interfaith Council at UWG seeks to advance interfaith cooperation to increase understanding of religious diversity and to support an inclusive campus culture,” McKendry-Smith said.

Franklin expressed his excitement for the Interfaith Council and its mission for religious diversity.

“King is listening and learning from new teachers now, not people who look like him or share his faith and theological perspective,” he said.

Franklin offered his final remarks for the luncheon by prompting the audience to reflect on their own legacy.

“As you walk out of the hall today,” he concluded, “think about how you can improve your health and conscience with respect to building bridges and helping to reduce prejudice and bias.”